NYT: "Scratching Under the Vinyl Era" 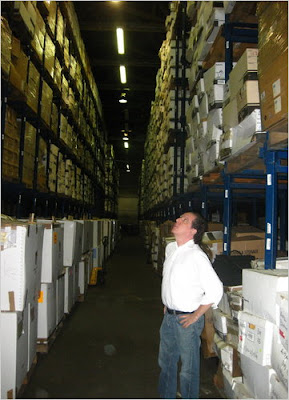 (Bob Kaus, an Atlantic Records executive, in a Brooklyn warehouse)

Scratching Under the Vinyl Era
The Warner Music Group is unearthing a cultural trove in its
vast archives.

Scratching Under the Vinyl Era
By TIM ARANGO
A version of this article appeared in print on November 9, 2010, on page C1 of the New York edition.

The images have been scattered about in dusty and moldy warehouses, relics of the pre-Internet age when photography was integral to selling music, and the photographers — names like Irving Penn, Annie Leibovitz, Lee Friedlander and Robert Mapplethorpe — went on to become nearly as famous as the subjects they captured and defined.

“Every day is like, what am I going to find today?” said Grayson Dantzic, the archivist for Atlantic Records in New York. With colleagues at Warner Music Group, Atlantic’s parent, he is part of an ambitious project to recover the company’s story — and a good chunk of American cultural history as well — by excavating the contents of nearly 100,000 boxes from warehouses around the globe, whose accumulated photographs and other memorabilia track popular music from the Edwardian and Victorian ages to disco and jazz, from Beethoven to Miles Davis.

In an industry whose product is now compressed into tidy digital bits, the project is an exercise in record-keeping that is partly motivated by the urgencies of economics. The material is potentially quite valuable, and the company is searching for ways to make money from it, through high-end art books, sales to collectors and applications for iPads.

The project is also a story of what media companies have left behind as they increasingly move to digital formats, a reconfiguring that has upended the economics of the business.

“I wanted to take an inventory of what we had,” said Edgar Bronfman Jr., the chairman and chief executive of the Warner Music Group. “We thought it was important from an artistic standpoint, from a corporate culture standpoint and potentially from a consumer standpoint.”

Mr. Bronfman, who calls the project “Sight of Sound,” added: “I think there’s the potential to make money. It’s indefinable.”

The archive project may also be instructive for reintegrating visual art into music marketing.

“Visual art has historically been a powerful component that deepens fans’ music experience,” said Will Tanous, an executive vice president at Warner who is overseeing the project. “We lost that in recent years. But with today’s emerging digital platforms, we have the opportunity to inspire a renaissance in visual art associated with music.”

After Mr. Bronfman and investors bought the company in 2004 from Time Warner, it took a few years for executives to realize what the company had in storage under Time Warner’s name, and they sent lawyers to the former owners to secure permission to release the materials.

In close to a year of digging, the company has only pricked the surface: there are still 14,000 boxes in New Jersey alone that haven’t been touched, and tens of thousands more elsewhere in the United States and abroad in places like Brazil, Japan and Australia.

Warner Music traces its corporate lineage back to 1811 through its ownership of the music publisher Warner Chappell, whose business then was selling sheet music and the machines to play it: pianos. Among the finds is a black-and-white photo of a Chappell piano being delivered to Buckingham Palace. Songbooks dating to the 1830s are among the oldest items. More recent materials include drawings by Maurice Sendak, who produced cover art for Elektra Records before he became famous as a children’s illustrator; a hand-written history of Atlantic Records by its co-founder Ahmet Ertegun; and recording contracts for some titans of American music.

“Aretha’s contract is right there,” said Mr. Dantzic, referring to Aretha Franklin and pointing to a box on a shelf above his computer. In another box is Ray Charles’s original recording contract, signed with an ‘X.’ In a separate office is a piano from the 1920s that George Gershwin played, come upon in a cluttered storage area.

A photocopy of a letter from Beethoven to a former pupil recommending Chappell as a music publisher, dated 1819, has sent Warner’s archivists digging for the valuable original.

But the bulk of the delights — of potential value to high-end collectors — are the rock and jazz photographs, including a series of unpublished black-and-white shots of Led Zeppelin in the studio in 1969 by Jim Cummins. The intimate collection by Mr. Cummins, who was an Atlantic photographer, portrays a group of young rockers before they became hugely famous and includes a rare image of Robert Plant, the band’s singer, playing the acoustic guitar.

“There was a real sense of documentation back then,” said Bob Kaus, an Atlantic executive who is involved in the project. “Music and art really go together.”

Among other images Mr. Dantzic displayed recently were platinum palladium prints Penn took of Miles Davis; New Orleans jazz photos from the 1950s by Mr. Friedlander, whose work is currently on display at the Whitney Museum of American Art in New York; a contact sheet of Ms. Leibovitz’s images of Ms. Franklin at the Fillmore West in 1971, as well as a collection of shots of the same event taken by Jim Marshall, the rock photographer who died this year. (Photography aficionados will enjoy an image Mr. Marshall took of Ms. Leibovitz.) Materials related to some of Mapplethorpe’s early days as a photographer for Elektra in the 1970s — he shot at least one album cover for the band Television — are being sought in an archive on the West Coast.

Before the Internet, photography was so much a part of selling music that record companies spared little expense to hire photographers to shoot album covers and document a band’s work, on the road and in the studio. Today that documentation occurs, but often by the bands themselves, with flip cameras and mobile phones. The vinyl record, in effect, provided a large canvas for a photographer — a surface made smaller with the advent of the compact disc, and virtually non-existent in today’s world of digital downloads.

“I’ve had my ego stroked a lot,” said Mr. Cummins, who recalled entering record stores and seeing his work on giant displays. “You were definitely an integral part of what was done.”

Jac Holzman, who founded Warner’s Elektra Records 60 years ago, was a pioneer in integrating visual art and popular music — and documenting the artistic process at every stage, including the marketing and business aspects. When the company placed a billboard for the Doors on the Sunset Strip in Los Angeles in the 1960s, the Doors were on hand, and Mr. Holzman made sure it was all photographed.

“We were all adept at photography,” Mr. Holzman said. “Any employee who would be at a session was given a camera. I never went to a session without a camera.”

These days “you don’t have the canvas to show your work,” said Neal Preston, a photographer who worked for Atlantic in the 1970s and whose own images of Led Zeppelin and others from that era have been uncovered in the archive project. “There is a deep connection for a lot of us in terms of what an album cover means to us emotionally,” he said. “It goes hand in hand with the music. At least it used to.”

Mr. Preston spent years on the road with bands, photographing fly-on-the-wall moments at the behest of Atlantic Records.

“These jobs aren’t given out anymore,” he said. “Bands and labels don’t want to spend the money.”

Lisa Tanner was hired as a photographer by Atlantic in the late 1970s when she was just 17, and hit the road with bands like the Rolling Stones, Foreigner and Yes.

“You just sort of hung out,” she said, “and waited for a moment to happen.” .
Posted by Arnaldo DeSouteiro at 8:06 AM

it's bewildering the press releases some huge companies release. Is it they are being coy, or are they truly ignorant. I can name 10 people I know that would have a field day of possiblities in one of those warehouses and they present a story like it's some sort of archeological dig. well it is in sorts, but why do they present it like that? Is it building up to some marketing hype they are narrowing on? Probably.
Anyways, that would an amazing time looking through that stuff..it's bewlidering. Some days it's bewildering just looking at one thrift shop, let alone archives/storage of untouched goods and most likely unique items.