Blu-ray of the Month - "Pat Metheny: The Way Up - Live in Korea" 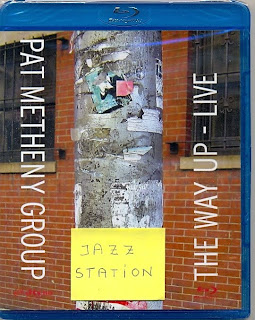 Pat Metheny is one of the most original and distinctive guitarists of the contemporary jazz scene. Together with long time collaborator and keyboard player Lyle Mays, he founded the Pat Metheny Group in 1978. Instantly successful, they have established themselves at the forefront of jazz-rock fusion with a succession of best selling albums and sellout world tours. This Blu-ray, shot in late 2005, features the full concert version of "The Way Up" CD, which earned the Pat Metheny Group their 10th Grammy Award and Metheny personally his 17th.

"From the beginning, the band has been on a mission. 'The Way Up' is a long form piece, in four movements, that describes in detail many of the most pressing issues in our musical lives," Metheny says. "The original studio recording, in 2004, was a milestone for us, but the tour that followed allowed us the opportunity to discover the piece in front of audiences around the world over the course of a six month tour."
Includes four tracks, interview with Metheny, and bios of the members of the group.