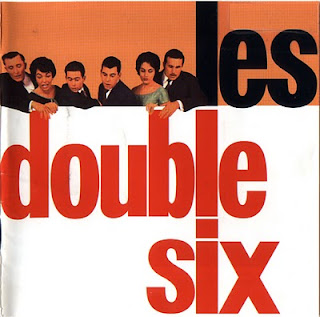 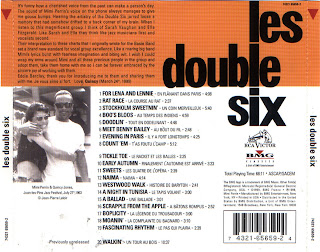 This French import CD reissue, from songs recorded in 1959-1961, is also a showcase for the composer/producer Quincy Jones. The six member group includes Ward Swingle, singer and arranger for the Swingle Singers, and "Les Double Six" is a clear antecedent for his subsequent work. With original French lyrics written by Mimi Perrin, the tracks, such as "Naima," "Moanin'" and "Fascinatin' Rhythm" feature vocals doubling as instruments, and capture the essence and fluidity of the lines with startling accuracy (particularly in the upper registers sung by Christiane Legrand, who was in the French incarnation of the Swingles as well). About half the compositions are by Jones; all are accompanied by a trio of piano, bass and drums. Twenty songs, including the previously unreleased "Walkin'" - a ten plus minute smorgasbord of sound - are practically as satisfying as a round-trip ticket to Paris!
Posted by Arnaldo DeSouteiro at 4:52 AM