Melena back @ Steamers by popular demand! 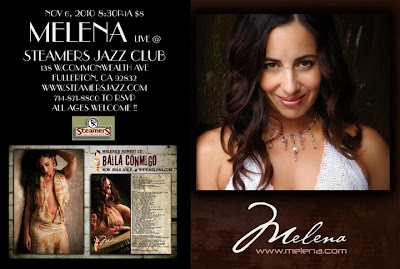 Melena has packed the house at Steamers Jazz Club in Orange County for five consecutive months, being asked back by popular demand. She has also recently played with Poncho Sanchez, Frank Cano, and Jose Rizo's Mongorama Band.

Steamers Jazz Club and Cafe
138 W. Commonwealth Ave
Fullerton, CA 92832
714-871-8800
jazz@steamersjazz.comMelena Francis Valdes, born in Havana Cuba, has mastered the traditional rhythms that have traveled from Africa to Cuba, to the dance floors of America. Her Afro-Cuban sound is a conversation of melodies which she plays with fierce passion. Melena is a multi-talented percussionist who plays Congas, Timbales, Bata Drums, and Shekere. She is an artist who exemplifies the sound of legendary players from the past, to the modern sound of today.

Melena's formal training began on the drums when she was a teenager. Master percussionist Luis Conte was instrumental in shaping her early development. Melena returned to her native country of Havana Cuba several times to study privately with the Conjunto Folklorico Nacional De Cuba, as well as with many gifted percussionists on the island such as: Miguel "Anga" Diaz, Yaroldy Abreu, Jose Miguel Melendez, Roberto Vizcaino Guillot, Adel Gonzalez, Cristobal Larrinanga, Mario Jauregui, Daniel Herrera, an Jose "Pepe" Espinosa.

Since then, she has toured, performed, and recorded with legendary artists such as: Barry White, Stevie Wonder, Macy Gray, Julio Iglesias, and Chayanne. Melena fronts her own Latin Jazz and Afro Cuban Salsa band. Festivals Melena has performed at with her band include: Jazz at Drew, African Village Festival, Santa Barbara Caribbean Festival and Brownsville Latin Jazzz Festival, where Melena was blessed to share the same stage with her biggest inspiration, Giovanni Hidalgo!

This great percussionist has also been featured as a guest musician for several recordings and Live DVD/PBS specials for artists such as: John Tesh, Eva Ayllone, Peru Negro, Joel Holmes and Unwrapped Vol. 2. & 3. Melena was also the featured percussionist for the HBO Loco Slam Comedy Series with Carlos Mencia. In addition she was featured on the televisin show "Prison Break" playing congas alongside actor Amaury Nolasco.

This Summer of 2010, Melena has been headlining in both the East and West Coast at festivals such as: Altadena Summer Festival, Manhattan Beach Summer Concert, and Richmond, Virginias' Latin Jazz and Salsa Festival. She has specialized her studies in the Afro-Cuban tradition and on the Sacred Bata Drums; she has taught her students the importance of the history and knowledge of Afro-Cuban drumming and the language of the Batas. Melena is someone to be recognized as one of the most accomplished and proficient female percussionist in the music community. So, if you're in the California area tonight, don't miss to savor this "experience."

Posted by Arnaldo DeSouteiro at 7:28 AM