CD of the Week - "Christian Weidner: The Inward Song 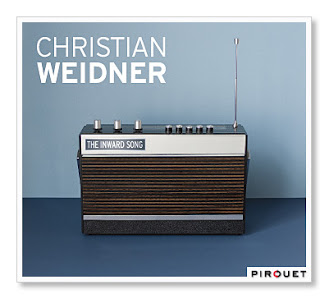 CD of the Week
Christian Weidner: "The Inward Song" (Pirouet) 2010

Christian Weidner's CD "The Inward Song" is a unique, clearly thought-out artistic statement. The music impresses with its high sense of style and subtle feeling for aesthetic clarity. It stands on its own - radiating an enormous inner strength. The eleven pieces on this CD -- all comppsed by the leader -- are unpredictable, completely organic and swingingly logical. An enthralling atmospheric unity develops, a strong slipstream of sequential moods and sensations - for the listener, an exciting journey of discovery.

Born in 1976 in Kassel, Germany, and currently living in Berlin, Christian Weidner comes from a musical family. After several years of piano lessons, Weidner changed to alto saxophone and at 16 took his place in the Hessian State Youth Orchestra, and at 17 in the German National Youth Jazz Orchestra (BuJazzO). He also began taking lessons from the well-known American saxophonist John Ruocco. Weidner began working with Gunter Hampel at the age of 18 and continued for the next eight years until 2002. In 1996 he received first prize at the "Jugend jazzt" with the jazz quintet Naima which he led from 1993 until 1998.

Weidner began his musical studies at the College for Music and Theatre in Hamburg and then continued as an Erasmus exchange student at the Royal Music School in Stockholm, Sweden. Weidner ended his studies in 2002 at the Hanns Eisler Conservatory for Music in Berlin. In addition, Christian Weidner designates his collaboration with Simon Stockhausen, John Schröder and Antonio Palesano as especially formative.

In 1999 he travelled to New York to record a CD with Gunter Hampel and Nils Wogram and to study with Kenny Werner. Weidner played with the German-French Jazz ensemble from 2001 to 2004, and had the opportunity to work with Albert Mangelsdorff. In 2009 Weidner formed his new quartet under his own name with Colin Vallon, Henning Sieverts and Samuel Roher.
Posted by Arnaldo DeSouteiro at 5:45 AM