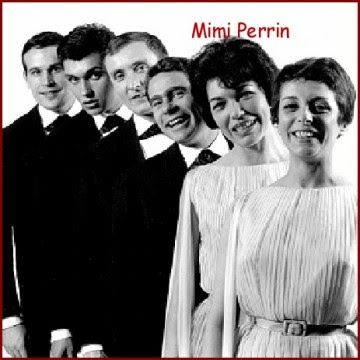 Mimi Perrin, 84, a singer and pianist who formed Les Double Six, a vocal group that specialized in powerful and inventive French-language re-creations of jazz instrumental arrangements, died Nov. 16 in Paris.

The newspaper Ouest-France reported the death but did not provide a cause of death.

Les Double Six performed in the vocalese style popularized in the United States by King Pleasure and Lambert, Hendricks and Ross in the 1950s and later Manhattan Transfer.

The French-born Perrin, whose voice a Time magazine critic described as "extraordinarily agile," spent her early career playing bebop jazz piano and working as a backup singer for Blossom Dearie and other cabaret acts in Paris.

She formed Les Double Six in 1959. Although a sextet, the group took its name from the fact that studio overdubbing gave the impression of having twice that many singers.

For lyrics, Ms. Perrin often wrote piquant story lines involving gangsters and lovers to accompany the melody of a given song. Quincy Jones, one of Ms. Perrin's chief arrangers, once praised her "fearless imagination and biting wit."

Ms. Perrin said that it was hard to create lyrics from the rapid-fire and precise solos initially played by such virtuosos as Parker. The French language, she told National Public Radio in 1999, "doesn't swing." She had to emphasize syllables and words that normally are not stressed in everyday French.

Her native tongue, she added, is a "glorious language... but I had to, you know, twist it a little so that the words would bounce like in English."

The classical music publication Gramophone weighed in on the French group in 1963. While sniffing a bit at the whole vocalese concept, the magazine compared the sextet to vocal athletes who "can still be wondered at... just as a trapeze artist excites our awe." Les Double Six, continued the review, displays "quite enthralling examples of this particular kind of expertise."

Onstage, Ms. Perrin said that she and her colleagues "thought like musicians" -- trying to channel the sound of a trombone or saxophone depending on the part that they were copying from the original recording.

"I remember when I went onstage and my solo was coming, I had to put my hands like I was holding a saxophone," she told NPR. "It helped to feel like I was inside the instrument and I was Charlie Parker, you know."

Other members of the group included, at various times, Ward Swingle -- who later formed the popular Swingle Singers and applied vocalese to Bach -- and Christiane Legrand, the sister of celebrated composer Michel Legrand.

Les Double Six produced a handful of albums and worked with such first-rate jazz musicians as trumpeter Dizzy Gillespie, pianist Bud Powell and drummer Kenny Clarke before breaking up in the mid-1960s.

Jeannine Perrin was born Feb. 2, 1926. After early musical training, she attended the Sorbonne and began working as a pianist at French nightclubs. She had a daughter, Isabelle, but a complete list of survivors could not be confirmed.

A rerelease in 1999 of her Les Double Six work brought a deluge of praise to the group. Clive Davis, writing in the Sunday Times of London, noted the "surreal but quite wonderful" rendering of her lyric-writing ability.

He pointed to one of Ms. Perrin's verses to "Naima" that described the memory of lovers on a beach: "Drag onto the shore, there, with a heavy step, our beautiful dreams, from a summer morning. All is lost, yes, but hold me tenderly there, in your arms, just a little more. The golden pearls of the morning are bursting in the sea, like so many tears."

In later years, Ms. Perrin worked as a book translator and developed a specialty in the spy novels of John le Carre.
Posted by Arnaldo DeSouteiro at 4:52 AM