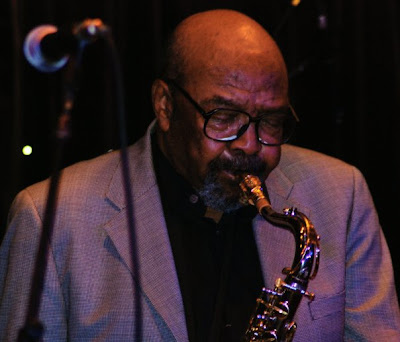 James Moody disclosed that "he has had pancreatic cancer since at least February -- and that he had decided not to receive any chemo therapy or radiation treatment" (Sign On San Diego). The 85-year-old NEA Jazz Master underwent surgery in February, but a resection of the tumor proved impossible without endangering his life. His wife Linda gives Moody's e-mail address in the article and invites fans to e-mail her husband so that he can "feel the love from people around the world whose lives he has touched".

Jazz saxophone legend James Moody, a San Diego resident for the past 21 years, has disclosed that he has had pancreatic cancer since February and that he had decided not to receive any chemotherapy or radiation treatment.

At his behest, Moody's condition was previously only shared with family members and some of his most trusted confidantes in the music world. Moody, 85, and his wife, Linda, decided to inform their friends and his fans of his condition in an e-mail letter she sent out earlier this morning.

"He and I agreed, after discussing it at length, that it was time to let people know about his situation," Linda Moody said, speaking by phone from the San Carlos home she and her husband have shared since they got married here in 1989.

A 1998 recipient of the National Endowment for the Arts' prestigious Jazz Master Award, Moody has performed three times at the White House and has been internationally hailed as one of the jazz world's great musicians for more than 50 years.

"He's about the music -- all the time," Pulitzer Prize-winning jazz trumpeter Wynton Marsalis said in an April Union-Tribune interview. "I've worked with Moody a lot and he's just impeccable, his musicianship, his soul, his humor. He's a titan of our music and I love him."

Moody, who is under medication, was sleeping this morning and not available for comment. He underwent surgery on Feb. 28 at UCSD Thornton Hospital to have his pancreatic cancer tumor resected, but this proved impossible without endangering his life. His gall bladder was removed and a double bypass was performed on his digestive system to remove blockage.

"We decided to let people know about his condition now, mainly because I felt he should feel the love from people around the world whose lives he has touched," said Linda Moody, who invited fans to e-mail her husband at moodysmountain@cox.net

When not asleep or resting, Moody still plays his tenor saxophone and flute several times a week for varying lengths of time, depending on his energy level. He also enjoys listening to music and watching his favorite TV show, "Dancing with the Stars," with his wife, a San Diego Realtor.

"He's comfortable and very peaceful and happy," she said.

Moody's status as a saxophone giant and a jazz icon dates back to 1949 and his classic recording of "Moody's Mood for Love."

A dazzling reinvention of the 1935 song, "I'm in the Mood for Love," it showcased his melodic and harmonic ingenuity on the alto saxophone.

Intriguingly, it was an instrument Moody had rarely played before that now-famous recording took place in Sweden, during his three-year European sojourn.

"Moody's Mood for Love" features what remains one of the most heralded sax solos in jazz history. That solo by Moody in turn inspired a vocal version by jazz singer Eddie Jefferson in 1952, followed by singer King Pleasure's hit pop vocal version in 1954.

In 2001 "Moody's Mood for Love" was elected into the Grammy Awards' Hall of Fame. Hailed by Bill Cosby, a longtime Moody friend, as "a national anthem," the song has been Moody's musical trademark for the past 61 years. An international hit that has never gone out of style, "Moody's Mood for Love" has been recorded numerous times by artists as varied as Aretha Franklin, Van Morrison, George Benson, Queen Latifah, Amy Winehouse, Rod Stewart and 2006 "American Idol" contestant Elliott Yamin.

During a 2005 Union-Tribune interview to preview her performance here at Humphrey's Concerts by the Bay, soul music queen Franklin brightened notably upon learning her Moody – one of her longtime idols -- resided in the area.

"Does James Moody live in San Diego? The famous James Moody! I would love to meet him," Franklin said during that interview.

She then added: "I wonder if he would come to the concert and sing `Moody's Mood for Love?' And I would sing it with him. I've never, ever met him. And I would absolutely love to."

Their unrehearsed duet of the song on stage at Humphrey's was a highlight of the concert for Franklin, who laughed with delight when Moody launched into a darting scat vocal line so ebullient and intricate that even she couldn't match it.

Moody's most recent album, "4B," was released just this summer.

He has made more than 50 albums as a band leader and has been featured on literally hundreds more by such prominent artists as Quincy Jones, Oscar Peterson, Lionel Hampton, B.B. King and trumpet great Dizzy Gillespie, who was Moody's early mentor and served as his best man when Moody and Linda were married here.

Moody performed concerts around the world until late last year. He was in typically robust and spirited form during a Union-Tribune interview early this year at his San Carlos home, where he spoke thoughtfully about his lifelong dedication to jazz and the saxophone.

"With any instrument, you never get it all. But you try to get as much as you can," he said.