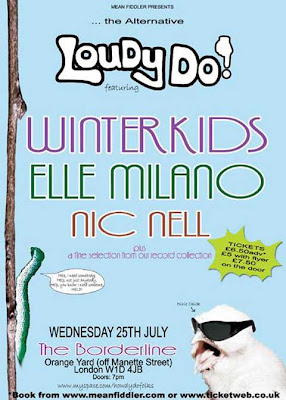 With their gobby, powerful and inherently catchy art pop songs, Winterkids’ stage perfomances have created a massive stir, and they return to the Borderline to play a joint headline show with ELLE MILANO.

“(One of the) 10 most promising Brit names hovering on the horizon...Reminiscent of the Buzzcocks at their most bustling" NEW YORK DAILY NEWS

"For bright melodies, adolescent heartache, and none of the usual stultifying self-seriousness, "Tape It" isn't to be missed." PITCHFORK MEDIA

"An infectious and breezy romp through pastures of uncomplicated new-wave pop… brilliant." NME

“Elle Milano could possibly be the most exciting band to burst out of the suburbs since… well, you know where we’re coming from” Drowned In Sound

After the critical acclaim that followed their 2006 EP “Swearing’s for Art Students” Elle Milano release their album “Acres of Dead Space Cadets” in October and bring their frantic, engaging and messy live show to the Borderline in July. Don’t miss it.

“ ‘Believe Your Own Hype Always’ says it all for the band, start believing because this band are the musical equivalent of giving an eloquent middle finger to everything you hate. Simply brilliant.” GIGWISE
Posted by Arnaldo DeSouteiro at 8:13 PM