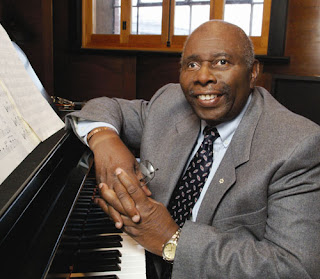 The 73 year old pianist Oliver Jones has performed at the festival Jazz de Montreal since 1981, as J.D. Considine reports ( Toronto Globe and Mail ). He opened and closed the festival - and he likes the closing spot more. Jones grew up in the Montréal quarter where Oscar Peterson's family lived, and he took piano lessons from Peterson's sister Daisy. As a pianist he has often been compared to Peterson, though he likes to keep back stylistically, preferring ballads to up-tempo tunes. And he loves to accompany, for instance the singer Ranee Lee with whom he has recorded an album two years ago. He thinks that it is important to actually know the lyrics to the ballads he plays. His generation still lived those lyrics; today many musicians just know the melody to the tunes. Among his favorite songs is Billy Strayhorn's "Lush Life" which you don't have to improvise a lot over - "you can play that just the way it was written".
Posted by Arnaldo DeSouteiro at 12:30 PM