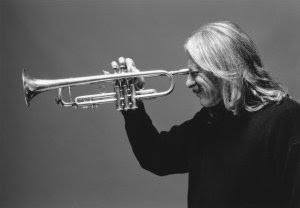 Italian trumpeter Enrico Rava would rather live in Bavaria than in Genoa, as he tells Mike Zwerin, as life there is a bit more normal ( Bloomberg.com ). The Casa del Jazz in Rome presented a three day Enrico Rava festival late last month. Rava looks more and more like the patriarch he is for Italian jazz. When he came to jazz, Rava was the only Italian jazz musician to be taken seriously, writes Zwerin. Meanwhile two generations of jazz musicians have matured behind him, one of them being the trombonist Gianluca Petrella whom Zwerin is especially impressed with. Rava is mainly interested in expression. The trumpeter acknowledges that there are many technically proficient musicians playing on today's scene, but nobody who can reach the emotional depth of a Thelonious Monk, Billie Holiday or Louis Armstrong. He loves playing jazz, he loves to play his own thing.
Posted by Arnaldo DeSouteiro at 4:14 PM