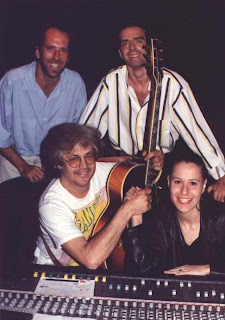 In his recently published autobiography Larry Coryell has a lot to tell, as Mark Stryker reports who interviews the guitarist ( Detroit Free Press ). The influence of guitarist Grant Green whom he first heard in 1965 stayed with Coryell to this day – he still tries to live up to that intensity. It was not easy to write about his problems with drugs and alcohol. When he came on the scene as a musician, fusion and the avantgarde were parallel developments. Jimi Hendrix and the avantgarde jazz scene moved in similar directions. His decision for a trio setting for his current band was influenced by him hearing the Branford Marsalis trio at the Village Vanguard.
Pictured above: Paulo Malaguti, Arnaldo DeSouteiro, Larry Coryell and Ithamara Koorax
Posted by Arnaldo DeSouteiro at 4:38 PM