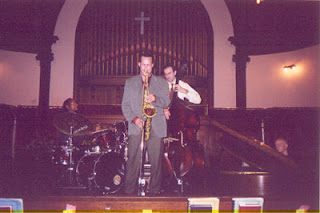 Help us welcome Saxophonist Dennis Mitcheltree’s Quartet in their debut performance next Tuesday, July 24 at "Jazz Tuesdays" in the Gillespie Auditorium at the New York Baha'i Center at 53 East 11th Street (between University Place & Broadway). There will be two shows at 8:00 and 9:30 p.m.
The Dennis Mitcheltree Quartet features Jesse Crawford on Bass, Bill McClellan on Drums, and Johannes Wallmann on Piano.
After years of performing at small jazz clubs, saxophonist Dennis Mitcheltree is realizing the rewards for his years of work, study and persistence. With an abundance of recent concert and club appearances, combined with his 4th CD/DVD release as a leader and constant touring, Mitcheltree is in a position to do what he does best; play his music.
Mitcheltree organized his own quartet that continues to perform at clubs, concerts and jazz festivals throughout the North America and Europe. His composition for jazz sextet and string quartet, "Suite No.1", was presented at Carnegie Hall in 1995. His quartet has been featured on televised jazz specials and live radio performance and interview programs worldwide.
Mitcheltree is also the Artistic Director of the American Music Group, widely known for it's INFLUENCES series presenting original arrangements of compositions by jazz masters including Billy Strayhorn, Duke Ellington, Charles Mingus, Joe Henderson, Woody Shaw, Thelonious Monk, Tadd Dameron, Bud Powell, John Coltrane and Miles Davis. A former student of Joe Lovano, Billy Pierce, George Garzone and Ralph Lalama, Mitcheltree teaches private lessons and group classes at the Greenwich House Music School, NYU and for Long Island University in addition to conducting jazz clinics at colleges and other jazz organizations.
Admission is 15.00, $10.00 for students.
Tickets will be sold at the door, or call 212-222-5159 for reservations and information.