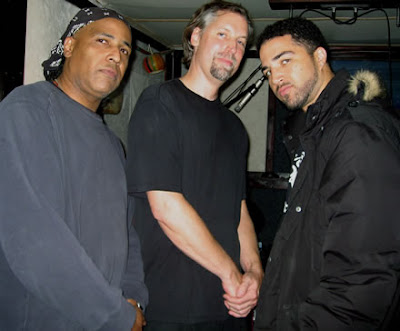 JazzHopRevolution is an edge cutting ensemble that brings together jazz bassist/composer John Lindberg with hip-hop lyricist/vocalist Rahman Jamaal and percussionist Tani Tabbal in the groundbreaking recording Tha Sound of Truth. The cross-genre, inter-generational collaboration is a musical journey influenced by Louis Jordan, Babs Gonsalves, Charles Mingus, Miles Davis, KRS-One, Tupac Shakur, Sun Ra and Nine Inch Nails. The two disc package features a CD with ten original pieces composed by Lindberg and Jamaal and a DVD with two selections directed by John Bongiorno: The Myth Music Video and a short documentary on the making of Tha Sound of Truth.

THE ARTISTS
John Lindberg has been an important contributor to jazz and creative music
for over thirty years, appearing on over sixty seminal recordings, including
thirty seven as a leader/co-leader.

Rhaman Jamaal established himself as both a hip-hop emcee and an actor in
Brandon Sonnier's award winning film The Beat. He is an integral voice on the
west coast hip-hop scene, a member of Hip Hop Congress and a teacher at The
Academy of Hip Hop.

Tani Tabbal is a unique drummer that masterfully laces odd and mixed meters
and a total diversity of rhythmic feeling and colors into his playing. He has
appeared on dozens of key jazz and world music recordings, and recently released his first solo album.
Posted by Arnaldo DeSouteiro at 8:30 PM