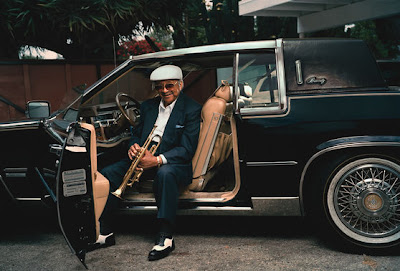 Snooky Young, an ageless jazz trumpeter who performed in nine decades and was a longtime member of Johnny Carson's "Tonight Show" band, died May 11 at a relative's home in Newport Beach, Calif. He was 92 and had complications from a lung disorder.

Mr. Young, who began his career in the 1930s, was one of the last active survivors of the Age of Swing. He was a diminutive trumpeter with a big sound, and he anchored the trumpet sections of big bands led by such renowned musicians as Jimmie Lunceford, Count Basie, Lionel Hampton and Benny Carter.

He performed on movie soundtracks, including "The Color Purple," "New York, New York" and "Blazing Saddles" and appeared as a sideman on albums by artists as diverse as B.B. King, Quincy Jones and the rock group the Band.

Mr. Young, who recorded only three albums as a leader of small groups, preferred the brassy, roaring sound of a big band. His specialty was in playing first trumpet, or lead, in a big band. Although he didn't solo as much as other players in the section, he usually played a tune's melody and, with his soaring high notes, formed the core of the band's trumpet sound.

"Snooky is one of the world's all-time great trumpet players," saxophonist Bob Cooper told the Los Angeles Times in 1992. "I can always feel it in the sax section when he's playing -- his time, his interpretation of the material, his sound."

Mr. Young's trumpet can be heard on such classic recordings as Lunceford's "Uptown Blues" (1939) and Basie's "The Atomic Mr. Basie" (1957), which featured the Neal Hefti tune "Li'l Darlin'." In 1941, he played the trumpet part for Jack Carson's character in the jazz movie "Blues in the Night" and appeared in the film as a musician.

Mr. Young joined NBC's celebrated "Tonight Show" studio band in New York in 1962 and stayed on when the show moved to California 10 years later. He was sometimes featured in solos or in musical duels with the band's leader, trumpeter Doc Severinsen. The ensemble broke up when Carson retired in 1992.

"It was a great band in New York," Mr. Young recalled in a 2008 interview for the National Endowment for the Arts. "But when it got to California, I think it might have even got to be better."

Eugene Edward Young was born Feb. 3, 1919, in Dayton, Ohio, and was called "Snooky" for as long as he could remember. He began playing trumpet at 5 and appeared in his family's band, the Young Snappy Six.

By age 7, he was winning talent contests by imitating the playing and singing of Louis Armstrong. In the NEA interview, he said that he met Armstrong when he was very young. "My mom saw him and stopped him and said, 'Louis Armstrong, this is my son, Snooky,'" he recalled. "'He wants to play trumpet like you and he admires you very much.' I can still remember, Louis hugged me and said many really nice things to me."

From 1947 to 1957, Mr. Young led small groups in Dayton. He was a founding member of the highly regarded Thad Jones-Mel Lewis Orchestra in 1966 and, in later years, often toured with Severinsen and performed with the Gerald Wilson Orchestra and Clayton-Hamilton Jazz Orchestra. He was was named an NEA Jazz Master in 2009.

The trumpet is a physically demanding instrument, but Mr. Young remained active until the end. According to his family, he practiced three to four hours every day. Early in his career, he said, he tried to emulate Armstrong, "but I got older and realized you can't be another musician, you have to find your own way."
Posted by Arnaldo DeSouteiro at 8:56 AM