Diana Krall & Paul McCartney: recording together for Paul's next album, a "standards" project 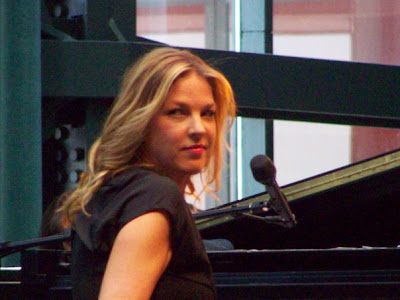 Diana Krall helps lay down some tracks with Paul McCartney on his Standards project!

In LA, at Capitol Studios, Paul McCartney began making another dream come true: he started recording an album devoted to covers of pop standards from the pre-rock years. "It's my dad's style of music," he says. "I've wanted to do that kind of thing forever, since the Beatle days. But then Rod [Stewart] went mad on it. I thought, 'I have to wait so it doesn't look like I'm trying to do a Rod,'" he told Rolling Stone magazine.

Diana Krall and her quartet took part of the proceedings, which also included orchestral arrangements, but the number of songs to be used is uncertain and the titles remain strictly confidential. Other tracks will be recorded in London later this year.

For additional infos, please check:
http://www.rollingstone.com/music/news/paul-mccartney-preps-standards-disc-reissues-20110516
Posted by Arnaldo DeSouteiro at 4:23 AM