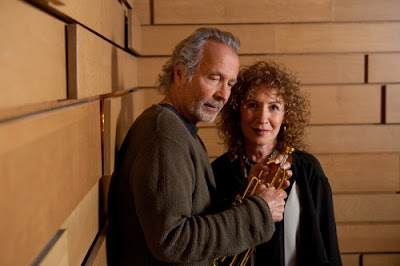 The title of their most recent CD -- "I Feel You" on Concord Jazz -- says it all.

"It's the feeling of not being afraid to make a mistake," says Alpert. "If you are too cautious and you're trying to make everything perfect, it's going to sound that way. We kind of like to let it fly and see what happens."

That brand of freedom only works with trust built over time, and this husband-and-wife team has been collaborating professionally for 45 years.

The only longer-term relationship for Alpert is his affair with brass that generated hits like "The Lonely Bull," "Casino Royale" and "Rise."

"I started playing when I was 8," he says. "I was fortunate to have music classes in my grammar school. They had a bunch of instruments on a table and I picked up the trumpet. I was very shy, super shy, and when I made some noise on the trumpet it kind of was speaking for me. It just had my name on it."

Much as he loved the horn, the idea of an acting career did briefly distract him. "It was kind of a folly. I was working at a gym and some guy said I looked like I should be in the movies, so I said, 'OK. Put me in!'" he says with a laugh. "I started studying acting. In fact I studied with Leonard Nimoy. This was before 'Star Trek.' At some point I realized I didn't have the passion for it, but I enjoyed the experience."

He met Hall, who was lead singer for Sergio Mendes and Brazil '66, in 1966 when the group auditioned for Alpert's A&M record label. They married in 1974 and have successfully managed joint and solo careers ever since.

"The music we've been doing for the last three years are songs we've been collecting for that proverbial rainy day," says Hall. "The day came and we went to the list and started rehearsing all these great songs that we felt a vibration with. For me it was almost coming full circle because these are the songs I learned as a girl singing along with the albums by folks like Judy Garland, June Christy and Anita O'Day."

The goal, however, was not to just rerecord some beloved tunes.

"We spent a lot of time arranging them so that they didn't sound just the way most people would remember them," Hall says. "That was very challenging, but that's where you can make a song your own."
************
Trumpet Legend Herb Alpert Coming to O.C.
by Peter Larsen
Orange County Register, May 14, 2011
Jazz trumpeter Herb Alpert hadn't performed in concert much for years, figuring the most commercial parts of his past would overshadow anything else he might want to play today.

"I was reluctant to do it because I thought people would be screaming out, 'Play "Tijuana Taxi" and "The Lonely Bull,"'" says Alpert, who co-founded A&M Records on the success of his hugely successful recordings with his band the Tijuana Brass in the '60s.

Then in 2006, Alpert and his wife Lani Hall, played a short set at the Hollywood Bowl, part of a 40th anniversary celebration for Sergio Mendes and Brasil '66, for whom Hall had been the original singer and Alpert had signed and produced at A&M, and the crowd's response was tremendously positive, he says.

His percussionist, Michael Shapiro, suggested doing a tour of small jazz clubs after that, Hall loved the idea but Alpert still wasn't sure.

"So we were hemming and hawing," he says. "And a few months go by and Lani brought up the idea that if we don't do it now, when?

"The first concert we played nobody yelled out (for Tijuana Brass tunes), they were just enjoying it. And we really enjoyed it, too."

It was the first time he and Hall had toured together even though they'd married in the early '70s. And it was so much fun for the couple that they've now returned with a new album, "I Feel You," and a new tour that brings them to the Segerstrom Center for the Arts in Costa Mesa on Friday.

"We did a live album about two years ago, and then "I Feel You," the first studio record I've done in quite a time," Alpert says from his home in Malibu recently. "We were rehearsing some songs for the new shows and we felt we had some songs that deserved to be put on -- I was about to say 'tape' -- put on zeroes and ones.

"The object is to try to take songs that are familiar and scramble 'em up in such a way that they sound fresh."

And that's a very accurate description of what listeners will find on "I Feel You." The album runs from classic pop-rock songs such as Van Morrison's "Moondance," and the Beatles' "Blackbird" and "Here Comes the Sun," to jazz standards such as Peggy Lee's "Fever" and Brazilian numbers by artists such as Milton Nascimento and Baden Powell.

It also includes -- after more arm-twisting by Shapiro and Hall -- a new arrangement of the Tijuana Brass' "What Now My Love."

"I had to be talked into it," Alpert says. "Michael came up with this rhythm, and that was intriguing, and then Lani, she said, 'Why don't you try "What Now My Love" on top of it?' When I first started playing it I wasn't crazy about it -- I felt like I was just trying to recreate the past. But then I extended the melody and it just worked."

In concert, Alpert, Hall and the band -- in addition to Shapiro, pianist Bill Cantos and bassist Hussain Jiffry -- mix it up much more than he did back in the heyday of the Tijuana Brass, he says.

"We always kind of scramble it around," Alpert says. "The basic premise of the live performances, Lani establishes the song for the most part, and we have the chord structure and the general flavor of where we're going, but everything that's happening behind her is improvised."

The Tijuana Brass, in contrast, was much more structured, he says.

"We were making singles, the songs were maybe two-and-half, three minutes at the most," Alpert says, noting that he does play a medley of those classic tunes in his current shows. "You didn't have time to stretch out and improvise. It was a different type of feeling that I was sending out at that time. There were so many people who wanted to hear us, I wanted to give it the way it sounded on the record."

In Costa Mesa on Friday, though, you'll get more of a jazz show. You'll also likely get to hear Alpert sing, which he does on the album as well, taking on the 1954 June Christy tune "Something Cool," a song he performs from the point of view of a traveling salesman in a hotel bar.

"I always liked that song, there was something haunting about the melody," he says. "I find myself going toward those melodies that I find myself whistling.

"I don't know if anyone else gets the lyric like I do, but it's this guy, a traveling guy, and he's a married guy," Alpert says of the way he interpreted the song. "And he sees this girl in a bar, and he's tempted, but he decides not to do anything about it, so he just orders her something cool.