CD Reissue of the Week - "George Benson: Beyond The Blue Horizon" 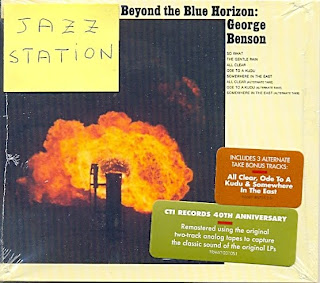 CD Reissue of the Week
George Benson: "Beyond the Blue Horizon" (CTI/Sony Masterworks) 1971/2011

Benson's label debut with the then-new "independent" CTI (Benson had previously recorded four albums for Creed Taylor during the A&M/CTI days in the late '60s), "Beyond The Blue Horizon" is considered to be one of his best records, featuring the long-forgotten organist Clarence Palmer, bassist Ron Carter (ocasionally overdubbing on cello in the official take of "All Clear," in both takes of "Ode To A Kudu" and on "The Gentle Rain"), drummer Jack DeJohnette, and percussionists Michael Cameron (tablas on "Somewhere in the East" exclusively) & Albert Nicholson (congas on "All Clear," "The Gentle Rain" and "Somewhere in the East.").

The program includes three Benson originals - "All Clear," "Ode To A Kudu" and the Ravi Shankar-influenced "Somewhere in the East," all originally included in the Side B of the vinyl issue - plus great versions of Luiz Bonfá's "The Gentle Rain" (already acclaimed as a jazz standard, covered by everyone in the jazz bizz - from Jimmy Smith to Oscar Peterson, from Tony Bennett to Astrud Gilberto) and Miles Davis' "So What?" AllMusic.com calls it “a superb jazz session … a must-hear for all aficionados of Benson’s guitar.”

This reissue includes, as bonus tracks, alternate takes (discovered by Didier Deutsch) of "All Clear," "Somewhere in the East" and the tender ballad "Ode To A Kudu," the latter becoming one of Benson's personal favorite compositions, to the point he performed it very often in concerts throughout the '70s, and even re-recorded the tune twice: for his 2-LP live set "Weekend in LA" in 1978 (Warner, a huge pop hit thanks to "On Broadway") and during the sessions for the all-star band Fuse One's second album, "Silk," in 1981. Oddly, the track was not included in the original vinyl LP issue of "Silk," seeing the light of the day only in a rare 45rpm single.
***********
CTI's top expert, Doug Payne, wrote an insightful review on his "Sound Insights" blog:
http://dougpayne.blogspot.com/2011/04/celebrating-cti-records-40th.html

Guitarist George Benson had already waxed three records for Creed Taylor, including the iconic The Other Side of Abbey Road, a jazz take on the famed album by The Beatles’, and made significant contributions to such early CTI classics as Stanley Turrentine’s Sugar and Freddie Hubbard’s Straight Life when he recorded Beyond the Blue Horizon, the guitarist’s first CTI album, in February 1971.

It is not only one of the guitarist’s most full-bodied jazz records – before or since – it is also probably the single best document of Benson’s technically fluid facility and his musically inventive lyricism at any tempo.

Supporting the guitarist in this endeavor are fellow CTI all-stars Ron Carter on bass and Jack DeJohnette on drums, all of whom were in the rhythm section for Straight Life, recorded only ten weeks earlier. Of curious note here, however, is the addition of Clarence Palmer, on organ. Palmer, who was then in guitarist Grant Green’s band and featured, with Green, on Jimmy McGriff saxophonist Fats Theus’ little-known CTI album Black Out, adds a backwards-glance nod to Benson’s organ-combo past. Benson had, in fact, not recorded in an organ-combo format under his own name since his very first group recorded for Columbia some half decade before.

But any thought that Beyond the Blue Horizon - which surprisingly does not include the popular song of the same title that Lou Christie performed on his 1973 CTI album – is some organ combo grinding out some forgettable soul jazz is quickly allayed by the fantastically vibrant take on Miles Davis’ “So What,” which opens the album. It’s so audibly logical and rhythmically sensible that it’s hard to believe the song wasn’t written this way in the first place.

The special affinity Benson, Carter and DeJohnette display on this showpiece performance is due to the fact that all were veterans of various Miles Davis aggregates (DeJohnette was still Davis’ drummer when this was made, but the trumpeter no longer featured this tune in his repertoire). While Palmer accompanies and solos with an exotic yet subtle flair, Carter and DeJohnette engage in an exciting dialogue throughout, getting a feature all to themselves in the middle of the song. Benson provides not one but two energetic guitar work-outs that put this particular performance at the forefront as one of CTI’s essential performances.

Luiz Bonfá’s lovely “The Gentle Rain” follows in a heavily percussive timbre that elicits one of Benson’s more angular and metallic commentaries, suggesting something more of a gathering storm. Benson seems to be providing an electric counterpoint here to Bonfá’s acoustic original. The song, from the 1966 film of the same name, was previously recorded by producer Creed Taylor for Astrud Gilberto’s album The Shadow of Your Smile with the composer/guitarist in attendance. But Benson’s take, which was edited to three minutes for a 45 single release, must have reached the composer’s ears for Luiz Bonfá re-cast the song in a very CTI-like manner on his 1973 album Jacarandá.

The remainder of the album is taken up by the presence of three (!) strong Benson originals, “All Clear,” “Ode to a Kudu” and “Somewhere in the East.” All three offer some of Benson’s most beautiful playing and Carter and DeJohnette’s deftly sensitive support.

Benson’s guitar on “All Clear” sounds like a cross between Gabor Szabo (who would begin recording for CTI the following year) and Wes Montgomery while the deliberately rough-edged “Somewhere in the East” crosses Szabo with the sound James Blood Ulmer would make his own several years later. The lyrical ballad “Ode to a Kudu” remained in Benson’s repertoire throughout the 1970s and can be heard in a live version on the guitarist’s well-known hit album Weekend in L.A. (1978).

The three Benson originals are also presented in alternative versions, which have been added to the CD release (and were also included in the previous two CD issues of Beyond the Blue Horizon). If possible, these are even better than the originals, especially since the distracting string work of the original “All Clear” is cleared away for some truly magnificent swinging by Benson, Carter and DeJohnette.

Beyond the Blue Horizon’s cover features Pete Turner’s dramatic “Flames,” shot in 1964 in Libya as part of a series the photographer produced for Standard Oil (the same series yielded the cover for Walter Wanderley’s Moondreams). The photo’s iconography perfectly captures Benson’s fiery and hypnotically transfixing performance throughout the record.
Posted by Arnaldo DeSouteiro at 11:23 AM