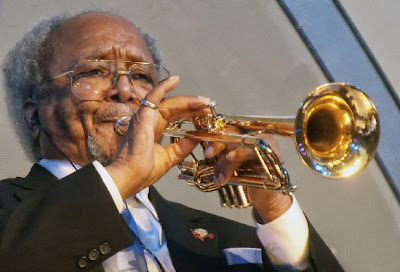 Born Eugene Edward Young on Feb 3, 1919 in Dayton, OH, jazz master trumpeter and LAJS Lifetime Achievement Award recipient Snooky Young just passed away this morning, May 11, 2011, at his home in Newport Beach, California. He was 92 and a current member of the Clayton-Hamilton Jazz Orchestra. Young is survived by his wife of 72 years, Dorothy; two daughters, Judy Andrews and Donna Hoo; a son, Danny; seven grandchildren; and six great-grandchildren.

"He first recorded with Jimmie Lunceford's orchestra in 1939," jazz historian Scott Yanow says. But I became acquainted with his name & artistry through the 2,000-plus studio sessions he took part on - from Duke Ellington to Jaco Pastorius, from Count Basie to Aretha Franklin, from Nat "King" Cole to B.B. King, Esther Phillips and James Brown.

And what a joy when I watched him for the first time - alongside Randy Brecker, Lew Soloff, Wynton Marsalis, Jack Walrath & Joe Wilder - in the trumpet section of Charles Mingus' "Epitaph" LaserDisc released in Japan in 1990, and later reissued on DVD. He can also be seen (mispelled Snookie in the credits) on Frank Sinatra/Quincy Jones' "Portrait of an Album" LD (a making-of documentary of the "L.A. Is My Lady" project), backing Sinatra in a great Sam Nestico arrangement of "Stormy Weather," alongside Jerry Hey, Gary Grant and Oscar Brashear in the trumpet section. 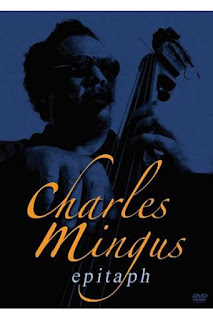 Posted by Arnaldo DeSouteiro at 4:45 PM