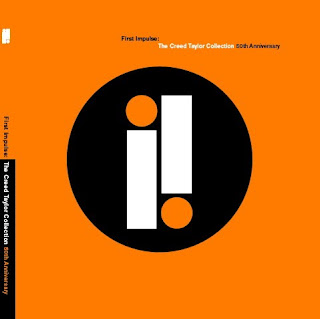 This 4-CD box set, released in the U.S. last April 19, celebrates the 50th Anniversary of the Impulse! label founded by the legendary producer Creed Taylor. Includes a 84-page hardbound book features essays by Mr. CTI and associate producer Ashley Kahn, author of the best-selling book on Impulse, "The House That Trane Built," as well as session photos and reproductions of the original LP artworks.

Both "The Great Kai & J.J." (which features Bill Evans, Paul Chambers, Paul Williams, Roy Haynes and Art Taylor) and "The Incredible Kai Winding Trombones" (with Bill Evans & Ron Carter playing together in three songs, plus the contributions of Jimmy Knepper, Tony Studd, Al Beldini, Paul Faulise, Johnny Messner, Bob Cranshaw and Olatunji, among others) had been previously released on CD format only in Japan. 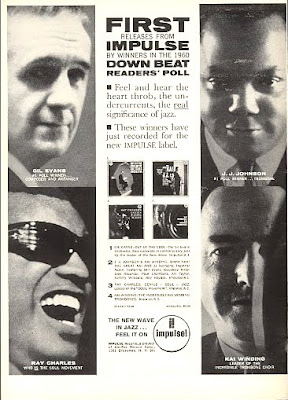 Legendary producer Creed Taylor launched the legendary Impulse label 50 years ago, wrapping his roster in a definitive look and an instantly iconic logo. "First Impulse: The Creed Taylor Collection," an exciting 4-disc collection from Verve Select, includes all six albums produced by Taylor for the label that proudly wore its signature colors of orange and black on its spines - plus rare tracks including unreleased John Coltrane rehearsals.

The six Taylor-produced albums in the set: Ray Charles's "Genius + Soul = Jazz," inducted into the Grammy Hall of Fame in 2011; John Coltrane's "Africa/Brass," the label debut of the great artist, who would have been 85 in September this year; Gil Evans' innovative arrangement lessons on "Out Of The Cool"; Oliver Nelson's masterpiece "Blues and The Abstract Truth"; along with two albums by trombonist Kai Winding, "The Great Kai & J.J." (with J.J. Johnson) and "The Incredible Kai Winding Trombones," both on U.S. CD for the first time. The set includes such radio hits and jazz anthems as Charles' "One Mint Julep" - the rare mono single version is also included at Creed's request - Coltrane's "Africa," Evans' "La Nevada" and Nelson's "Stolen Moments," plus rare alternate takes and unused performances, that offer a comprehensive look at the diverse range of music recorded during the label's first six months.

"First Impulse" also features a remarkable discovery: never before available performances by John Coltrane, originally recorded in a demo session 50 years ago for Africa/Brass. The three performances include the standard "Laura" and two original compositions by Cal Massey, who arranged the session: "The Damned Don't Cry" (later recorded at the "Africa/Brass" sessions) and "Nakatini Serenade" - a slower version than the one Coltrane recorded for Prestige in 1958. From 1961 through '76, Impulse was an important part of a pivotal, fertile period in jazz history. Through the exciting and rapid changes of the '60s and '70s, Impulse Records was, along with Verve (headed by Creed Taylor after MGM purchased it from Norman Granz), one of the most effective label bringing the exciting world of jazz to a new generation of listeners. 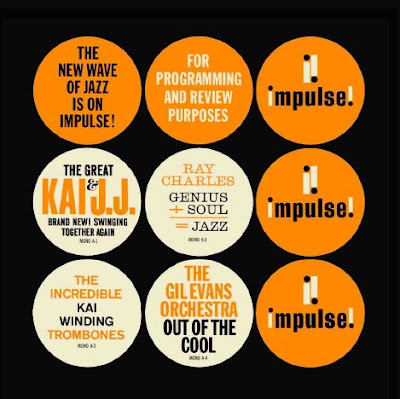 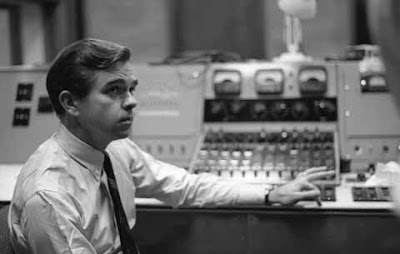 In 2011, Impulse Records will mark two major milestones: the label’s 50th anniversary, and the 85th anniversary of John Coltrane’s birth. Coltrane, who inspired Impulse’s nickname “The House That Trane Built,” is arguably the greatest artist in the label’s storied history.

Impulse Records was the brainchild of legendary producer Creed Taylor. Fifty years after its birth, Impulse Records is being celebrated with the release of "First Impulse: The Creed Taylor Collection," an exciting 4-disc collection that includes all of the timeless music produced by Taylor for the label that proudly wore its signature colors of orange and black on its spines.

The set includes such radio hits and jazz anthems as Charles’ “One Mint Julep,” Coltrane’s “Africa,” Evans’ “La Nevada” and Nelson’s “Stolen Moments,” along with two albums by trombonist Kai Winding (available on CD for the first time in the U.S.) – plus rare alternate takes and unused performances – that offer a comprehensive look at the diverse range of music recorded during the label’s first six months. With a vibrant design appropriate to an Impulse collection and extensive liner notes that include Creed’s own recollections, "The Creed Taylor Collection" serves as the opening chapter of the label’s rich and lengthy story.A series of live events and releases of rare and previously unreleased material are being planned to commemorate the label’s anniversary and Coltrane’s 85th birthday.

From 1961 through ’76, Impulse was an important part of a pivotal, fertile period in jazz history. Through the exciting and rapid changes of the ’60s and ’70s, Impulse Records was arguably the most effective label bringing the exciting world of jazz to a new generation of rock listeners. It boasted a roster filled with the sound of jazz tradition and the shape of jazz to come, releasing timeless recordings by John Coltrane, Sonny Rollins, Charles Mingus, Duke Ellington, Dizzy Gillespie, Count Basie, Quincy Jones, Gato Barbieri, Pharoah Sanders, McCoy Tyner, and Keith Jarrett among many others. From the most challenging innovators to the most established traditionalists, Impulse made them all sound equally and eternally modern.

It’s no small matter that the age of Impulse overlapped an age of rapid social and political changes, of searching and experimentation. To many who made it through, Impulse was an inherent part of that velocity, keeping pace with – at times predicting – the sound and politics that lay ahead. “That’s where it’s at right now,” explained Impulse chief Bob Thiele in 1966. “Jazz music has always reflected the times. Today, there are violent, social transitions taking place, and these changes that are sometimes confusing, come out in musical expression.”

Impulse initially stood out from other labels of the day by covering a vast and variegated overview of the music – from swing to the extreme experimental edge of sixties jazz. Eventually, the mainstream label fine-tuned its focus almost exclusively on the avant-garde, and distinguished itself further by successfully marketing that style.

How Impulse was first perceived – and how that perception evolved – is one of the threads binding the story of the label. At the outset, in 1961, it was a success on radio and at the retail level. By the mid-‘60s, critics praised its catholic taste and commercial triumphs, its ability to profitably encompass the range of jazz talent. By the ‘70s, “it seemed as though Impulse became the label characterized by the angry black tenor man,” says producer Ed Michel, who led the label into the ’70s, and the rock era. “They weren’t angry, they weren’t all black and they weren’t all tenor men but that was kind of what it appeared to be.”

Impulse’s devotion to the mostly avant-garde, mostly African-American players collectively responsible for the last significant leap forward in modern jazz – the point where most jazz histories and timelines tend to end – stands today as one of the label’s most important accomplishments. The label’s commitment to experimentally charged music can be traced to the influence of one jazz musician who could help shape the musical identity of a major recording enterprise like Impulse Records: John Coltrane. “Coltrane was the jewel in Impulse’s small catalogue during the sixties,” says Creed Taylor.

As the man who both started Impulse and originally signed Coltrane to the label, Taylor is the focus of what will be a multi-volume approach to the deep and varied Impulse story. As The Creed Taylor Collection marks the 50th anniversary of the label’s beginning, so future releases will trace the successive stages of one of the most significant recording enterprises of the 20th Century. 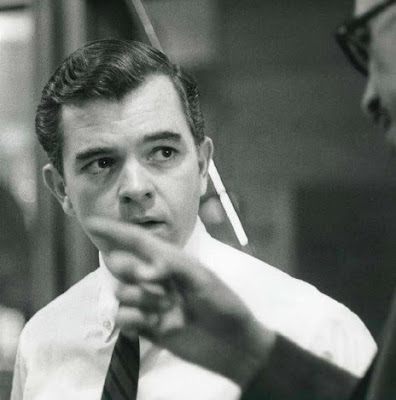 Like finding a few extra cookies at the bottom of the jar, Impulse Recordings has announced its upcoming four-CD set "First Impulse: The Creed Taylor Collection" will include three previously unreleased demos by John Coltrane.

Recorded in early 1961 for "Africa/Brass," the large ensemble album that would mark the saxophonist great's debut for Taylor's new label, the songs were recorded and conducted by trumpeter and Coltrane friend Cal Massey.

Including the standard "Laura" along with two Massey compositions — eventual "Africa/Brass" track "The Damned Don't Cry" along with a slower take on "Nakatini Serenade" (previously recorded by Coltrane in 1958) — the demos could offer an interesting glimpse into Coltrane's process heading into the "Africa/Brass" sessions, which featured arrangements by Eric Dolphy.

In addition to "Africa/Brass," the set will also include Ray Charles' "Genius + Soul = Jazz" and two albums by Danish trombonist Kai Winding that were never released in the U.S. Scheduled to come out in April, the set is part of a yearlong celebration of Impulse's 50th anniversary that is said to also include a series of live events and further releases in conjunction with what would have been Coltrane's 85th birthday this September. 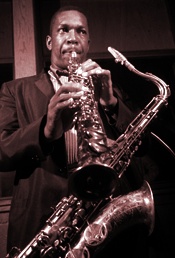