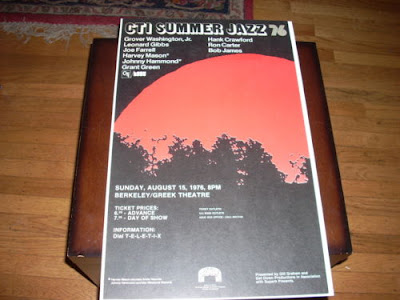 This is a concert poster (14" x 22" size) of the final CTI All-Stars tour in the '70s, when members of the CTI/Kudu cast used to tour the U.S. and Europe (and sometimes Japan too) annually, always during Summertime but also including some dates in the Spring, from 1971 to 1976. Two decades later, Creed Taylor tried to resurrect the all-stars format by creating a group called CTI Superband that toured Japan in October 1990. They taped the "Music on the Edge" CD but the group name was changed to Chroma when the album came out. Most recently, a new CTI All-Star Band toured some European countries in July 2009 (a concert at the Montreux Jazz Festival was released on CD/DVD/Blu-ray formats in Japan) and did a single concert in Germany on March 10, 2010.

Originally billed as "CTI Summer Jazz 76," that event took place in Berkeley's Greek Theater, in San Francisco, on August 15, 1976, reuniting the rising star alto-soprano saxophonist Grover Washington, Jr. (the top selling CTI/Kudu act at that time, thanks to his hugely popular "Mister Magic" and "Feels So Good" albums issued on the Kudu imprint), veteran alto sax player Hank Crawford, organ master Johnny Hammond -- who, curiously, had already left CTI and was under contract with Milestone -- and the best jazz bassist ever Ron Carter (the only three members of the first CTI All-Stars incarnation which was taped live at the Hollywood Palladium in 1971 for the famous "California Concert" album recently reissued on CD by Sony Masterworks), the sadly underrated Joe Farrell (who had started to tour with the CTI All-Stars in 1972, as documented on the "CTI Summer Jazz at The Hollywood Bowl" project as well as in the "CTI at The Olympics - Live in Munich" bootleg), and legendary guitarist Grant Green (who had been signed by Creed but released only one solo album for Kudu, "The Main Attraction").

Drummer Harvey Mason and percussionist Leonard Gibbs (aka Doc Gibbs) completed the rhythm section, both at the suggestion of Bob James, who was ready to leave CTI and sign with Columbia.

Something that any CTI fan would like to know: yes, the tapes of that concert (as well as from all other CTI All-Stars concerts from the 70s) still exist and remain in the Sony archives. But an official release would be a miracle...

Posted by Arnaldo DeSouteiro at 6:46 AM

Hi Arnaldo,
In 2010 they released 30th anniversery edition of Jobim's stone flower remastered by Joseph M. Palmaccio.
Is this the same as the japanese king records version ?
Wich edition shoul I by ?
And wy have jobim's wave album such a muddy sound ?
Thanks
jef

Hi Jef
Firstly, thx for reading.
Secondly, thx for asking.
If you are a fanatic CTI collector, you should purchase both issues.
They sound completely different due to a simple fact. All the U.S. and European CD reissues of "Stone Flower" were remixed from the original multi-track tapes by Mark Wilder back in 1989. The lenght of the tracks changed, the LP version of track 4, "Brazil," was extended, some horn parts were added to the mix of track 1, "Tereza, My Love" and a previously unreleased take of "Brazil" with a string section was added as a bonus track since the first U.S. CD issue in 1990, for which I wrote the liner notes.
But all the Japanese CD reissues were mastered from the original 2-track analog tapes mixed by Rudy Van Gelder. It means they are digital issues with the same mix and the same "RVG sound" of the original LPs.
I own copies of several Japanese CD issues of "Stone Flower" released by King Records and the two best ones are: KICJ 2038 (released in 1989, available in standard jewel case but with the CD booklet reproducing the complete artwork of the original LP) and, my favorite, KICJ 8325, released in 2000 with a goregous 24-bit remastering by engineer Seiji Kaneko, who employed the Studer A800VUMK II equipment, the HSR-2000P and the dCS900 AD converter. It includes a new set of liner notes I wrote specially for the Asian market.
The KICJ 2157 issue, that came out in Japan by King in 2007, in the "CTI Timeless Collection," also sounds great.
The only Japanese issue I don't recommend at all (except as a rarity for obsessive CTI collectors) is the first one, from 1987, since we still were in the "beginning" of the CD era, using the first analog-to-digital converters, and the technology hadn't been perfected yet. In the '90s, everything improved regarding equipment for digital transfers, mastering etc.
Cheers!