Kurt Elling on the road with "The Gate" 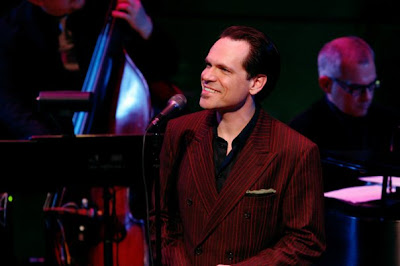 In the past three months, The Gate Tour has taken Kurt Elling's band to 19 U.S. cities in 15 states and 16 cities in 10 European countries! They've played 64 shows to very enthusiastic and appreciative audiences.

After a brief intermission, The Gate Tour resumes later this month in the Middle East, with dates in Istanbul, Turkey and Tel Aviv, Israel, followed by shows in Milan, Paris, Hamburg, and Budapest. As Kurt says, "All new notes!" Please see MAY Gigs below for details and previews of coming attractions.

In addition to Kurt's radio and television interviews, nearly 60 articles & reviews have introduced "The Gate" to fans around the world and chronicled the gigs on these extended road trips. Two of those were terrific cover stories in JazzTimes and Jazzwise magazines.

Once again, Kurt Elling is a finalist for the Jazz Journalists Association award for Male Singer of the Year. Kurt has won this prestigious award six times before, in 2000, 2002, 2006, 2007, 2009, and 2010. Other nominees this year are Freddy Cole, Giacomo Gates, Bobby McFerrin, and Gregory Porter.

Professional members of the JJA vote to select winners from more than 200 finalist nominees in 39 categories of excellence in music creation and music journalism.
Winners will be announced at the 15th annual JJA Jazz Awards Gala on June 11, 2011 at City Winery, NYC and simultaneously via live streaming video to be viewed online and at satellite parties.

"The Gate"
Kurt Elling's "The Gate" - produced by Don Was & featuring Laurence Hobgood, John Patitucci, John McLean, Bob Mintzer, Terreon Gully, Kobie Watkins & Lenny Castro - is still in the top 3 on the JazzWeek Jazz Chart for the week ending May 2, 2011. This is its eleventh week on the chart. Nine of those weeks it's been #1!

Kurt's next master classes are Wednesday, May 11, and Thursday, May 12, from 10:00 am to noon, at Michiko Rehearsal Studios in mid-town Manhattan.

The Wednesday class is still open. There are just a few auditing spaces left for Thursday.
Cost: Participants (singing) - $125 or Auditors (listening only) - $60. If you've taken a KE master class before, you may audit again for only $30. To reserve a spot, for details, or to be notified of future master classes, please e-mail teaching@kurtelling.com

Coming up in June

And they're coming home to the Green Mill July 1-2!

To bring the KEQ to a stage near you:
Kurt and Laurence are on the road about 200 nights a year. They only perform where they've been invited and they don't get to set their own itinerary. To hear Kurt and the band play in your city, region, or country, please ask your favorite jazz clubs or festivals to book them through Ted Kurland Associates.
Posted by Arnaldo DeSouteiro at 10:41 AM