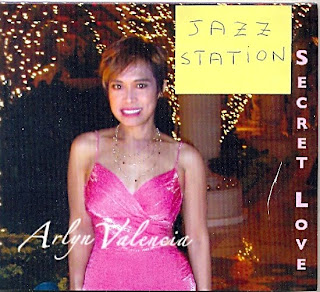 Born in the Philippines (the country of the great conga player Gilmore Digap - where are you, man?) and currently based in Las Vegas, Arlyn Valencia is not only an excellent singer but also a notable interpreter. Gifted with a very pleasant tone, she offers a delightful collection that could be entitled "Secret Bossa & Country Love," due to the ammount of Brazilian and country-music references. The opening track, for example, the 1953 Oscar-winning song "Secret Love," written by Sammy Fain & Paul Francis Webster for "Calamity Jane," is treated by arranger Jon Burr as an up-tempo samba.

Composed by Riz Ortolani and Nino Oliviero for the 1962 movie "Mondo Cane" and originally titled "Ti guarderò nel cuore", it became an instrumental hit for trombonist Kai Winding in 1963, at Creed Taylor's suggestion, who also produced an excellent version included on Stanley Turrentine's collection of out-takes "The Sugar Man," released by CTI in 1975. Curiously, the song was originally titled "Models in Blue/Modelle in Blu" on the United Artists film soundtrack, being retitled "Ti Guarderò Nel Cuore" after Marcello Ciorciolini added Italian lyrics, and "More" after Norman Newell did the English version sung by Valencia. Oddly, Ortolani's name is omitted on the credits of Valencia's CD.

The "beyond jazz" and "beyond bossa" tracks are quite good too, specially the country ballads "Vincent" (Don McLean) and "Landslide" (Stevie Nicks). The Marvin Hamlish/Carole Bayer Sager pop hit "One Hello" (composed for the movie adaptation of Neil Simon's stage-play "I Ought To Be in Pictures" and made famous by Randy Crawford) allows Valencia to showcase her expressiveness, sounding like the missing link between Lani Hall and Nancy Wilson.
********
Liner Notes by Ken Dryden:
Vocal CDs make up a tremendous percentage of new releases, but Arlyn Valencia stands out from the crowd with this heartfelt collection. Performing a wide range of styles, she demonstrates her gift for uncovering the essence of each lyric. A native of the Philippines, Arlyn Valencia is a physician who makes her debut recording under her own name with this diverse, enjoyable CD.

Recalling her early years, Arlyn remarked, “My family is musical, I started singing as soon as I started talking.” She also found time to perform during her undergraduate and medical school years. “I opened for a number of main acts. My repertoire included Broadway, cabaret, jazz and folk. I was a vocalist for a band that performed six days a week at the Silahis International Hotel in Manila and also played private parties. I later became part of an elite group called The Entertainex. We were all-around performers, solo performers, actresses. Thousands auditioned, they chose 12. We performed on TV and first-class establishments.”

Valencia didn't plan on becoming a doctor. “After earning a Bachelor of Science Degree in Zoology, I took the medical school entrance exam and passed it. Although we didn't have money, my grandfather paid for my first semester and then I was awarded a Rector's scholarship that covered the remainder of my tuition.” She earned her MD in 1986.

Arlyn came to the U.S. in order to complete her internship and residency training. “I did neurology and stroke sub-specialization at Albert Einstein College of Medicine - Montefiore Medical Center in New York City.” Relocating to Nevada, she served as an associate professor and neurologist at the University of Nevada School of Medicine. Currently she is the Stroke Medical Director of Sunrise Hospital and Medical Center in Las Vegas.

When Arlyn changes her focus from medicine to music, you can appreciate her wide range of interests. Influenced by vocalists like Sarah Vaughan, Lena Horne, Patti Austin, Dionne Warwick, Lani Hall and Angela Bofill, her CD mixes standards, bossa novas, pop and music written for film.

“Secret Love” is the first of several time-tested standards. “I've always loved this song. My mother used to sing it. Jon Burr suggested the fast samba arrangement.” The French (sic) song “More” was a hit in both Europe and the U.S. “It was pretty popular in my childhood. I'm a passionate lover, so when Jon gave me this beautiful, yearning arrangement, I fell in love with it. I sang it as if I was whispering to that particular person.” Houston Person’s emotional tenor sax is also a nice touch.

“Time After Time” has long been a favorite among vocalists, although it is Chet Baker’s version that sticks in Arlyn’s mind. “Every time I'm in love, I find myself singing this song!” Valencia expected to sing “Time After Time” in at a slow ballad tempo, but she learned Jon Burr’s brisk arrangement on the fly in the studio. She takes a different approach to the standard “If You Were Mine,” written by Matty Melnick and Johnny Mercer for the 1935 film To Beat the Band. “Mercer’s lyrics are honest and yearning. The folky Latin touch gave this song the quality that serenade songs in the Philippines are known for, yet this song is so timely. Thanks, Jon, for letting me ‘breathe’ your words.” John Hart adds a lovely solo chorus on acoustic guitar.

“Love is Stronger Far Than We” was written for the film ‘A Man and a Woman,” by Pierre Barouh, Jerry Keller, and Francis Lai. Arlyn has long been captivated by its haunting melody and lyrical focus on obsessive love. Person’s deft responses to the end of each vocal line provide the perfect complement. “One Hello” was penned by Marvin Hamlisch with lyrics by Carole Bayer Sager for the film I Ought to Be in Pictures. Its best known recording is by Randy Crawford, another of Arlyn’s favorite singers. The doctor jokes, “It's THE audition song. Every time I sing this, it lands me the job!”

“Like a Lover” has long been a popular Brazilian song. Written by Nelson Motta (sic) with Portuguese lyrics by Dori Caymmi (English lyrics by Alan & Marilyn Bergman), Arlyn notes, “’Like a Lover’ has very fresh, crisp melody and delicious bossa nova beat. The simpler the vocals are, the more beautiful the song gets.” Antonio Carlos Jobim’s “Waters of March” is another favorite of vocalists. Arlyn says, “It's a song of vignettes which may not be related, but if I step back and look at the overall picture, they all fit into the puzzle called life. Every time I sing it, I find a different meaning to a phrase.”

Arlyn is equally effective with pop. She sings its lyrics as if she has lived them. Bonnie Raitt had a hit with “I Can’t Make You Love Me,” though it was new to Arlyn. She captures its essence with an emotional interpretation, though the singer admits, “It is only of late that I profoundly related to its story.”

Stevie Nicks’ “Landslide” was a hit for Fleetwood Mac in 1975. Arlyn suggests, “This is my life in a song. The abstract nature of it gives us the freedom to interpret it according to our own experience, our own truth. The melody is so beautiful, so timeless.” Her soft, folksy rendition of The Beatles’ ballad “I Will” and sensitive performance of Don McLean’s tragic “Vincent” also merit praise.

Singer/songwriter James Jones sent Arlyn his “Learning to Fly” on youtube. “It's a story of love, of dreams and hope, the elation that comes when we are on the brink of realizing a dream.”
Posted by Arnaldo DeSouteiro at 10:01 AM