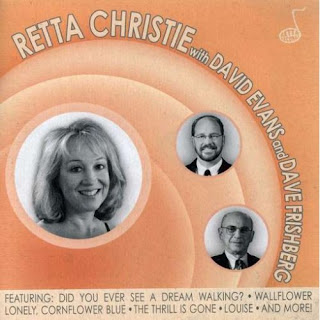 Highlights: "Cheatin' On Me," "Yearning Just for You," "Wallflower Lonely, Cornflower Blue" (written by Frishberg for his CTI debut album, "Oklahoma Toad"), the instrumental tracks "Louise" and "The Thrill Is Gone" (popularized by Chet Baker), "I'll String Along With You" (the Harry Warren-Al Dubin song from the Dick Powell-Ginger Rogers flick "Twenty Million Sweethearts"), "On Treasure Island," and "Did You Ever See a Dream Walking?" (an Harry Revel-Mack Gordon theme from the film "Sitting Pretty," starred by Ginger Rogers in 1934).

Retta Christie has a singular knack for that curious, vastly entertaining form of Americana that swings in the recesses between jazz and country. Think Jimmie Rodgers, dustbowl prophets like Cowboy Bob Wills or Floyd Tillman, or the flatland plains poetry of Hoagy Carmichael, and you’re in the neighborhood. Fans of Irving Berlin saloon songs will be swinging till the cows come home. - Tim Duroche, Willamette Week

"Retta Christie was an Oregon farm kid who learned to square dance and to accompany family members and her own singing with her guitar. She loves bristling Western swing, good Dixieland, cowboy movie music and clever song-stories by composers such as Floyd Tillman and Dave Frishberg. This is not eclecticism for its own sake–Retta has heartfelt reactions to a variety of songs and singers and she expresses those feelings by telling–singing–each story her own way." —Richard Hadlock, Host & Producer, The Annals of Jazz, KCSM-FM San Mateo, California

Vocalist Retta Christie has staked a claim to a fabulously rich but oft-overlooked vein of Americana, a musical mother lode located at the dusty crossroads where the American Songbook and the country-western canon converge.

Gifted with a light twangy timbre, breezy sense of swing, and a gift for conveying the emotional essence of a lyric, Christie released the first volume of her collaboration with reed expert David Evans and piano legend Dave Frishberg (who’s responsible for one of the American Songbook’s most witty chapters) back in 2008. And a second CD came out in 2010. Harking back to a time when Western swing bands, cowboy troubadours, urbane big bands, and suave pop singers often interpreted the same material, Christie has forged a singular synthesis of America’s pre-World War II popular music.

Both volumes of the Dave and David collaboration celebrate Christie’s personal and creative relationship with the late cornetist/pianist Jim Goodwin, a brilliant but far too unsung musician who landed back in his hometown of Portland, Oregon after long sojourns in Europe and Berkeley. Christie and Goodwin met in Portland, and as they started sharing their musical passions, they discovered considerable common ground despite the prejudice that often casts country music and jazz as antithetical traditions.

“I was immersed in older country and western, and Jim was obsessed with older jazz, and we both learned about each other’s music,” Christie says. “He introduced me to this whole world of early jazz, and I quickly started to realize that it wasn’t so different from what I was doing. Understanding that connection has really been the foundation of my music ever since.”

While Christie grew up amidst the mass media culture of the 1960s, in many ways her upbringing belongs to an earlier era. With no television on the family farm in rural Olney, Oregon (she was born in nearby Astoria on Feb. 21, 1959), music played a central role in the Christie family’s entertainment (three of her four siblings also went on to be professional musicians). The family regularly attended community dances at the local Grange hall in Olney, which often hosted Western swing bands. The music went hand in hand with her fascination for all things western.

“I was absolutely in love with cowboys and horses, and I liked the music that went with them,” Christie says. “I loved the idea of the West, riding the range and the nostalgia. My dad’s brother had moved west to Montana, and had a ranch. We grew up in Oregon, but I used to say, I can’t wait to go out West, meaning his Montana ranch.”

Christie acquired at guitar at 15, which unleashed her love of singing. She got her first real taste of the stage attending a local theater’s production featuring Woody Guthrie songs. After college on the East Coast (where she earned an art degree at Skidmore), she settled in Portland and her professional career took off. With her four- or five-piece combo Retta and the Smart Fellas, Christie started making a name for herself playing Eagles and Elks events.

Working as a deejay with a radio show focusing on old-time Western swing in the mid-1980s, she steadily expanded her repertoire. “They fed each other,” Christie says, whose weekly program on KBOO, The Noontime Jamboree, “has featured a jaunty mix of Western tunes and old-time jazz for more than a decade. I’d find these great old songs, and then play them a million times at home and learn them.”

Part of what sets Christie apart from so many of her peers is that she draws from a different set of influences. While her sound is far less anguished than Patsy Cline, Christie absorbed her narrative approach to a lyric. She’s also soaked up the rough-hewn expressiveness of Merle Haggard, the rollicking swing of Bob Wills, and the lithe, understated phrasing of Maxine Sullivan. Finding inspiration proved much easier than finding an audience in the early years, when Portland hipsters had yet to discover the joys of twang.

“When I was first playing Western swing, there weren’t any other western bands playing around Portland,” Christie recalls. “People thought it was old hackneyed country. We had to do so much education.”

Early on Christie made cassette recordings that she distributed at gigs featuring the Smart Fellas and two other bands, Meloddity and the Modern Age Drifters. It wasn’t until relatively late that she started making albums that fully captured her ebullient sound, starting with 2000’s Rural Jazz, a hard-swinging Smart Fellas session featuring her expert rhythm guitar work, Goodwin’s galloping piano, Kevin Healy’s hot fiddle, Jesse Johnson’s deft guitar, and Bill Uhlig’s thumping bass. The same Fellas joined her on 2003’s They Took the Stars Out of Heaven, a session released on her label Retta Records that prompted Frishberg to enthuse, “They’re authentic Western swing players and they can swing you into bad health.”

A longtime Christie fan, Frishberg ended up taking over as her accompanist when Goodwin’s health started failing several years before his death in April 2009. While Frishberg’s sound is more informed by bebop, he’s also a master of earlier jazz styles. And as a singer/songwriter who often accompanies himself, he knows how to support a singer without crowding her. With Evans’s lovely reed work serving as lyrical foil, Christie couldn’t be in better hands.

“Dave’s a little more modern than Jim, but he has the references to the older stuff,” Christie says. “Jim could swing like hell, he wasn’t stodgy. But Dave is a fabulous accompanist. You’re being delivered something on a silver platter. He makes things so easy and leads you where you’re going to go with such ease. He doesn’t get in the way of the vocals at all, it’s been wonderful.”
Posted by Arnaldo DeSouteiro at 11:23 AM