CD Reissue of the Week - "Laurindo Almeida: The Look of Love" 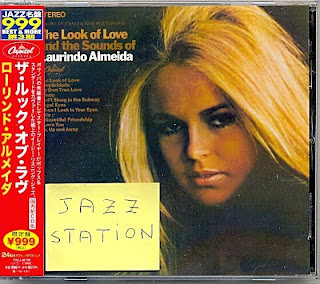 First CD reissue ever of one of Laurindo Almeida's best selling easy-listening albums for Capitol.
Excellent remastering quality!
Produced & conducted by Lex de Azevedo.
Arranged by Lex de Azevedo, except Jimmy Webb's "Up, Up and Away" (arranged by Dick Grove), and three tracks scored by Clare Fischer - Radamés Gnatalli's "Simplicidade," Cole Porter's "I Love You" and Stanley Styne/Donald Khan's "A Beautiful Friendship," a Nat King Cole hit - which, not coincidently, are the session highlights.
Almeida's readings of "Angel Eyes" and "When I Look in Your Eyes" are first-class too.
Clare Fischer's impeccable piano is heard throughout the album.
Posted by Arnaldo DeSouteiro at 10:10 AM