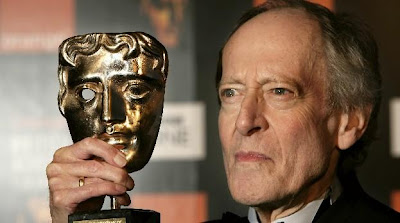 My personal favorite John Barry song, among so many outstanding themes he composed, remains the title tune from the "You Only Live Twice" soundtrack (written in 1967 with lyrics by Leslie Bricusse for the fifth film in the James Bond series), recently recorded on the excellent "Diane Hubka Goes to the Movies" CD in 2007.
**********
February 01, 2011
By Dennis McLellan, Los Angeles Times
John Barry dies at 77; composer scored 11 James Bond films

Barry won five Oscars for films such as 'Born Free' and 'Out of Africa' and scored Bond films including 'Goldfinger,' 'Diamonds Are Forever' and 'From Russia With Love.' His work on the Bond franchise put him in the forefront of music composers.

John Barry, a five-time Academy Award-winning composer of movies such as "Born Free" and "Out of Africa" who earned a prominent spot in pop-culture history by writing the scores for 11 James Bond films, including "From Russia With Love" and "Goldfinger," has died. He was 77.

Barry died Sunday in New York, where he reportedly had lived for some time, his family said in a statement. The cause of death was not released.

"I think he's without a doubt one of the giants of film music of the last 50 years," Jon Burlingame, a film music historian who teaches at USC, told The Times on Monday.

In a more than 40-year film composing career that began in 1960, the British-born Barry won his first two Oscars for the 1966 film "Born Free" — best original music score and best original song (for the popular title song, which he wrote with lyricist Don Black).

His work on the Bond films in the 1960s helped launch Barry into the forefront of movie music composers.

It began with Barry's work on Monty Norman's theme for "Dr. No," the 1962 movie debut of author Ian Fleming's 007, starring Sean Connery. The movie was scored by Norman.

Barry went on to score "From Russia With Love," "Goldfinger," "Thunderball," "You Only Live Twice," "On Her Majesty's Secret Service," "Diamonds Are Forever," "The Man with the Golden Gun," "Moonraker," "Octopussy," "A View to Kill" and "The Living Daylights."

Of Barry's memorable arrangement of the Bond theme for "Dr. No," Arnold told Burlingame for a 2008 article in Daily Variety: "You have the bebop-swing vibe coupled with that vicious, dark distorted electric guitar, definitely an instrument of rock 'n' roll.
Posted by Arnaldo DeSouteiro at 5:06 AM