DVD of the Week - "Gary Moore & Friends: One Night in Dublin" 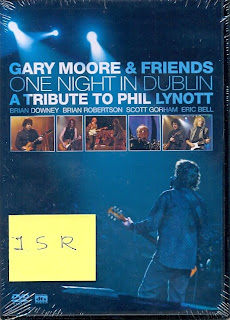 DVD of the Week
Gary Moore & Friends: "One Night in Dublin - A Tribute to Phil Lynott" (Eagle Vision/ST2)

On August 20th, 2005, performers joined forces under the leadership of Gary Moore for a concert to pay tribute to the memory of Phil Lynott. Performers include Jethro Tull bassist Jonathan Noyce and Thin Lizzy's drummer Brian Downey, plus guitarists Brian Robertson, Scott Gorham, and Eric Bell.

Extras include 30 minutes of behind-the-scenes film footage including the unveiling of a Lynott statue in Dublin and interviews with all the ex-Thin Lizzy members performing a hard-rocking set of Thin Lizzy classics. The touching tribute, recorded on what would have been Phil Lynott’s 56th birthday, includes energetic renditions of "Still in Love with You," "Walking by Myself," and "The Boys are Back in Town."

That day, a statue of Phil Lynott was unveiled in Dublin's Grafton Street by his mother.