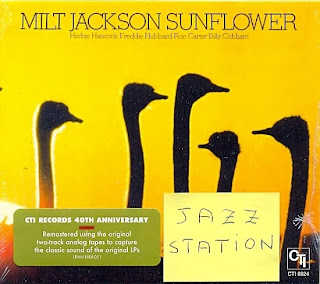 "Sunflower" is the most revered solo album by Milt Jackson, one of the greatest of jazz vibraphone players, and one of the most acclaimed improvisational blues instrumentalists of all time. He was a founding member of the legendary Modern Jazz Quartet, voted by Downbeat’s readers into its Jazz Hall of Fame in 1999. Thanks to Creed Taylor's impeccable production and Don Sebesky's sumptuous scores, "Sunflower" became an instant classic, and Milt's better and most commercially successful album ever.

Jackson's own ballad "For Someone I Love" (featuring the famous Spanish-tinged acoustic guitar intro performed by Jay Berliner), the Thom Bell/Linda Creed's r&b classy classic "People Make The World Go Round" and Freddie Hubbard's lovely title track are the highlights, featuring such players as Hubbard himself, Herbie Hancock, Ron Carter, Billy Cobham and Ralph MacDonald. Although "Sunflower" had been previously reissued on CD in the U.S., in remixed versions that changed the concept of both Creed Taylor & Rudy Van Gelder's works, this new domestic reissue on a mini-LP gatefold sleeve is the first one remastered (by Sony engineer Mark Wilder) from the original 2-track master tapes, using RVG's original mix.
******
Doug Payne's brilliant text, originally posted on his Sound Insights blog, follows:
http://dougpayne.blogspot.com/2011/01/celebrating-cti-records-40th.html

At this point, Jackson, one of the founding members of the Modern Jazz Quartet, had tired of touring with the MJQ, never attaining the audience, celebrity and financial rewards rock stars half his age with half his talent doing half the work were experiencing at the time. After a long career of solo albums on the Blue Note, Atlantic, Riverside, Impulse, Limelight and Verve labels stretching back some two decades that were blues-ier and far more swinging than anything the MJQ waxed, Jackson finally wanted his own piece of the pie.

Milt Jackson recorded three albums for CTI in the space of about a year, the first of which, Sunflower, is surely the best. Jackson, who had worked on surprisingly few previous Creed Taylor productions - notably only Quincy Jones’ This Is How I Feel About Jazz (ABC Paramount, 1956) and Gula Matari (A&M/CTI, 1970) – was up for making an album that would reach the younger ears CTI was reaching with popular records by Freddie Hubbard, Stanley Turrentine, George Benson, Grover Washington, Jr. and others.

The result, Sunflower, was something of an instant classic. Gathering a top-shelf collective of young talent including CTI recording star Freddie Hubbard (like Jackson, a veteran of many Quincy Jones sessions), pianist Herbie Hancock, bassist Ron Carter, guitarist Jay Berliner (audible on “For Someone I Love” only), drummer Billy Cobham, percussionist Ralph MacDonald and the arrangements of CTI’s house sound architect Don Sebesky, periodically alternating a sensibly sensitive commentary of horns and strings overdubs, Creed Taylor delivers what surely must be considered the vibist’s most distinctively wonderful record in an otherwise distinguished solo recording career.

The original program featured four long performances, kicked off by the lovely “For Someone I Love,” Jackson’s own composition, first waxed as the title track to the vibraphonist’s 1966 (though recorded in 1963) Riverside album. Initiated by Berliner’s guitar and coaxed by Hubbard’s colorful flugelhorn – not to mention Hancock’s especially exquisite piano solo - and Sebesky’s painterly strings, it is an especially terrific showcase for Jackson’s melodic mastery.

Such a curious though perfectly exploratory opening leads ideally into Michel Legrand’s romantic idyll “What Are You Doing the Rest of Your Life” (from the 1969 film The Happy Ending), a song that many jazz players had discovered after Peggy Lee’s initial cover and pianist Bill Evans’ many performances of the sumptuously quixotic ode. Again, Jackson, Hubbard, Hancock and Sebesky excel – and one notices here Ron Carter’s especially sterling contributions to the program (Carter went onto record and perform often with Legrand hereafter).

The album’s (arguably) most memorable performance is the cover of The Stylistics’ 1972 hit “People Make the World Go Round.” The funky ballad, which had already attracted jazz attention on radio with Ramsey Lewis’ invigorating take of the tune, catches Herbie Hancock comping on Fender Rhodes, but soloing marvelously in a Gospel fashion (like he had years before on his early Blue Note dates as well as those for Grant Green and Donald Byrd) on acoustic piano. Jackson, Hubbard and Carter are all in their element as well (Hubbard had recorded “People” earlier in the year for CTI, but this version of the song, which isn’t as good as Jackson’s version, was not issued until 1975 on The Baddest Hubbard. A 1972 CTI All Stars live recording of the song was also issued 1977.).

The original album wraps up with the title track, “Sunflower,” which is a re-titled version of Freddie Hubbard’s tremendous “Little Sunflower,” first heard on the composer/trumpeter’s 1967 Atlantic album Backlash. It’s another glorious performance that depends on the artistry of Jackson, Hubbard, Hancock, Carter and Sebesky to succeed as well as it does.

“SKJ,” a bonus track that has featured on previous CD issues of Sunflower, was recorded during these sessions, but included not on the original Sunflower album, but rather on Jackson’s 1974 album Goodbye, the second of his three CTI releases. “SKJ,” the initials of Milt Jackson’s wife and a song Jackson first recorded with Wes Montgomery on the pair’s 1961 Riverside album Bags Meets Wes, is an up-tempo blues that doesn’t exactly suit the mood of the original program. But it is still a worthy performance that captures this group doing what it does best.

Sunflower is one of the most enjoyable recordings in the entire CTI lexicon and remains a historically significant meeting of some of jazz’s best names. It also features one of photographer Pete Turner’s loveliest cover images, “Necking,” a photo taken in South Africa in 1970.
Posted by Arnaldo DeSouteiro at 6:01 AM