DVD of the Day - "Gary Moore: Live at Montreux" 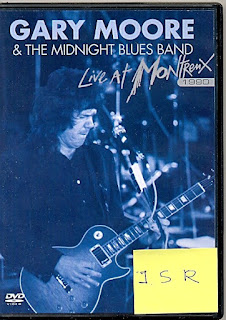 This concert was filmed in 1990 on the tour for "Still Got the Blues." It features the band used on that album and special guest Albert Collins, who also appeared on the CD and sits in on three songs at Montreux ("Too Tired," "Cold Cold Feeling" and "Further On Up The Road".) As a bonus feature, three tracks ("Out In The Fields," "Over The Hills & Far Away" and "Parisienne Walkways") from Moore's concert at the 1977 Montreux Fest are included.

Renowned guitarist Gary Moore, who passed away yesterday at age 58, devoted much of his early career to playing metal-tinged hard rock, first as a member of 1970s bands Skid Row, Thin Lizzy, and Colosseum II, and then as a solo artist throughout the 1980s. But in the 1990s, Moore reembraced the influences of Eric Clapton, Jimi Hendrix, and Peter Green for a return to his first love, the blues.

This concert captures the revamped Moore and his backing band The Midnight Blues at the Montreux Jazz Festival in 1990, performing tracks from that year's "Still Got The Blues" that includes "Walking by Myself," "All Your Love" and many more.