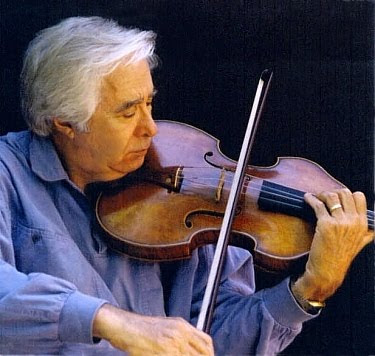 I used to call him "the Paganini of the viola," for his virtuosity in the instrument, easy to be noted in his outstanding classical recordings. But I also referred to Mr. Vardi as "the Harry Lookofsky of the viola," referring to his ability to crossover all genres of music in countless studio sessions. Below, you'll find a good obituary printed today in the NY Times, but they simply ignored his tremendous body of work in the jazz and pop fields.

From Billie Holiday to B.B. King, from Louis Armstrong (on Satchmo's biggest pop hit, "What A Wonderful World") to Tony Bennett's "Snowfall." From Cleo Laine to Judy Collins, from Jan Akkerman to Moondog to hundreds of movie and Broadway soundtracks, Emanuel "Manny" Vardi was the viola man. Not to mention Janis Ian, Herbie Mann, Jaco Pastorius (on his eponymous solo debut), David Sanborn, Shirley Bassey, Don McLean...The list goes on and on. He can be seen playing Marty Paich's arrangements to Carly Simon's 1990 "My Romance" LaserDisc.

Vardi also became Creed Taylor's top choice for the viola section everytime he needed to assemble a string section for a recording session. Rudy Van Gelder loved him too. Vardi's association with both Creed & Rudy began in 1967 on Wes Montgomery's "A Day in the Life," a turning point on the guitarist's career, starting his contract with CTI, then the "jazz division" of Herb Alpert/Jerry Moss' A&M Records. Since then, Vardi appeared in over 50 albums produced by Creed Taylor for CTI. One of the most interestings, in terms of orchestration, is Wes' "Down Here on the Ground," because the session arrangers Don Sebesky and Eumir Deodato, instead of using a large string section, opted for a chamber-like string quartet consisting of Vardi on viola, George Ricci on cello, and Gene Orloff & Raoul Poliakin on violins. The effect of this quartet melting with the rhythm section (Herbie Hancock, Ron Carter, Grady Tate, Ray Barretto) is simply stunning.

Besides the above mentioned Deodato, Vardi recorded with other notable Brazilian acts: Tamba 4 ("Samba Blim") and Milton Nascimento ("Courage," Milton's debut LP in the U.S.), both during the CTI/A&M days in the late 60s, as well as on two albums by genius guitarist/composer Luiz Bonfá, "The New Face of Bonfá" (RCA) and the masterpiece "Jacarandá" (Ranwood).

Long before, however, he fall in love with Brazilian music. Besides the many brilliant albums of classical music he recorded throughout his career (some of them mentioned in the NY Times article below, and some others not mentioned but equally superb and still available on CD), Vardi recorded for the Decca label, in the late 50s, an intriguing "pop" album credited to "Emanuel Vardi and his orchestra". It's titled "Love Dances of Brazil" (DL 78764), including such songs as Luiz Bonfá's "De Cigarro em Cigarro," Ary Barroso's "Brazil" (aka "Aquarela do Brasil") and Zequinha de Abreu's "Tico Tico no Bufá." A much sought-after collectors' item. 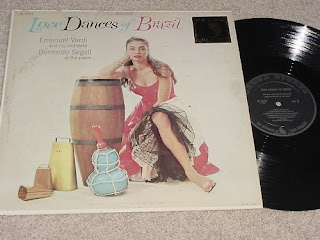 Emanuel Vardi, an American violist who was an ambassador for the instrument in an era when it had few public champions, died on Jan. 29 at his home in North Bend, Wash. He was 95. His wife, Lenore Vardi, confirmed the death.

With his recital debut in 1941, Mr. Vardi established himself as one of the world’s leading viola soloists, a group that included the Englishman Lionel Tertis; the Scotsman William Primrose; the German-born Walter Trampler; and few others.

Over half a century, Mr. Vardi performed on storied stages, including Carnegie and Town Halls in New York and Wigmore Hall in London, as well as at the White House, for President Franklin D. Roosevelt. He recorded widely and was heard often as a chamber musician.

Critics praised Mr. Vardi’s virtuosic technique, masterly control of color and tone, and willingness to perform music by 20th-century composers, a circumstance born partly of necessity, as the viola has suffered historically from a dearth of solo repertory.

In the public imagination, as Mr. Vardi was painfully aware, the viola was considered merely a humble alto cog in the vast orchestral machine. As a solo instrument it was long overshadowed by its soprano sibling, the violin, with its glittering trove of repertory, and more recently by its tenor one, the cello, with its dark brown, floor-shaking sonorities.

For a violist even contemplating a solo career, the paucity of literature was a perennial stumbling block. When Mr. Vardi began his work the very idea of a solo viola recital was unorthodox: finding enough worthwhile material to fill two hours seemed practically impossible.

To this problem Mr. Vardi brought a four-pronged approach. First, he adapted violin and cello literature for his instrument, a time-honored strategy by which violists have added arrows to their quivers.

An especially noteworthy achievement was his recording in the 1960s of Paganini’s 24 caprices for solo violin. On the violin, they are merely demonically difficult. On the viola, where the distance between notes is larger and the response time of the strings slower, they are harder still.

Second, he haunted archives in search of forgotten compositions — unearthing, for instance, a sonata by Alessandro Rolla (1757-1841), Paganini’s teacher and a composer of many works for viola.

Finally, he composed solo viola works, among them “Fantasy Variations on a Theme of Paganini.”

Partly through Mr. Vardi’s efforts, the viola emerged from the shadows, with solo recitals now a routine feature of classical concert programming.

Emanuel Vardi, familiarly known as Manny, was born in Jerusalem on April 21, 1915. His father was a violinist and painter, his mother a pianist.

As a small child, Emanuel studied the piano and violin. When he was about 4, the family settled in New York; at 6 ½ he made his recital debut on the piano at Aeolian Hall, on West 42nd Street in Manhattan. The New York Evening Mail called him a young pianist to watch.

He entered the Institute of Musical Art, a forerunner of the Juilliard School, as a violin student at 12, and studied there until he was about 20. Around that time he heard a recording by Primrose, had a conversion experience and took up the viola.

As a young violist, Mr. Vardi was a member of the NBC Symphony Orchestra under Arturo Toscanini; he made his solo recital debut in February 1941 at Town Hall to glowing notices. During World War II he was a soloist with the United States Navy Symphony Orchestra.

Mr. Vardi’s first marriage, to Margaret Bernhard, ended in divorce, as did his second, to Greta Mayer. In addition to his wife, the former Lenore Weinstock, a violinist and violist whom he married in 1984, he is survived by two daughters from his second marriage, Andrea Smith and Pauline Normand.

In 1993, after suffering a broken wrist and torn rotator cuff, Mr. Vardi retired from playing. He turned full time to painting, an art he had begun in boyhood, studied in Italy after the war and pursued throughout his musical career.

Over the years Mr. Vardi’s vivid canvases of musicians and cityscapes have been exhibited in galleries in New York City and elsewhere. Critics routinely praised his masterly control of color and tone.

A version of this article appeared in print on February 7, 2011, on page D9 of the New York edition.
Posted by Arnaldo DeSouteiro at 5:02 AM