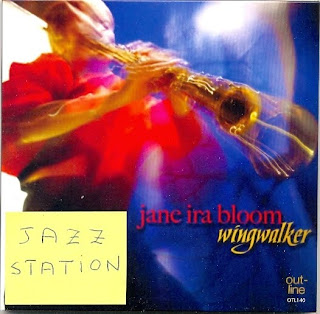 One of the most adventurous and original jazz instrumentalists of our time, Jane Ira Bloom once again offers us her multi-dimensional talents on "Wingwalker," her newest self-produced CD, brilliantly engineered by Jim Anderson (with the assistance of Akihiro Nishimura) at Avatar Studios in NYC. The amazing cover art, in digipak format, conceived by album designer Tom Hughes (with photos by Erika Kapin), fits perfectly with Jane Ira's inventiviness. Throughout the album, diving into interior or outer space in her music, it's a pleasure to listen how she takes chances with her crystal-clear soprano sound & exquisite compositions, navigating her unique musical path with complete abandon. All musicians are at their best, but Bobby Previte's always provocative drumwork steals the attention in several moments.

"Wingwalker," her 14th album as leader and fourth album on the Outline label reunites Bloom with long-time bandmates Dawn Clement on piano, bassist Mark Helias, and drummer Bobby Previte. After two years since Bloom’s previous release “Mental Weather,” she brought the band together on June 5 & 6, 2010, to cut new compositions written during time made possible by a Guggenheim Fellowship. The album features eleven Bloom originals and an a capella sax rendition of Lerner & Lowe’s standard “I Could Have Danced All Night.” From the groove inspired “Life on Cloud 8” to the spare simplicity of “Adjusting to Midnight,” Jane has journeyed further into jazz dimensions without a safety net, cruising in time to “Freud’s Convertible” with full-throated electronic expertise.

The CD also features an extra mp3 downloadable version of the music condensed into a 5 minute 49 second event. “There’s something different about the way the music revealed itself to the band in this recording. We didn’t have a lot of preconceptions and that allowed a certain freedom to open up and move the music in unexpected ways. All we had to do was to let it happen,” Jane Ira says.

A pioneer in the use of live electronics and movement in jazz as well as one of the soprano's most creative and distinctive voices -- alongside Dave Liebman and Wayne Shorter -- she’s the winner of the Mary Lou Williams Jazz Award, the prestigious Guggenheim fellowship and the Jazz Journalists Association (JJA) Award. Jane Ira the first NASA commissioned musician and has an asteroid named in her honor. Her music is always lyrical and provocative. “Bloom is a soulful, futuristic romantic at heart,” jazz critic Michael G. Nastos once wrote in the highly respected All Music Guide website.

Navigating the spaceways is nothing new for Bloom who has performed her music in venues as far reaching as the National Air & Space Museum’s Einstein Planetarium and the Kennedy Space Center. In the past few years she has performed at jazz concert series at Yale University, Cornish College of the Arts, The Rubin Museum of Art and the NY Public Library at Lincoln Center. A highlight of her schedule included taking part in “Resonations” International Telematic Music Concerts for Peace at the United Nations performing new compositions in real time with renowned musicians from around the world via the internet using telematic music technology. Resonations musicians included bassist Mark Dresser, pipa artist Min Xiao-Fen, percussionist Satoshi Takeshi, and vocalist Jen Shyu. A documentary webcast of the project can be viewed at: http://www.unmultimedia.org/tv/webcast/2010/12/wafunif-arts-for-peace-worldconcert-2010-an-international-telematic-music-concert-for.html

Another 2010 highlight included teaching at the first Jazz Composers Orchestra Institute seminar at the Center for Jazz Studies at Columbia University along with composers Tania Leon, Anthony Davis, and Alvin Singleton. The summer program under the direction of George Lewis brought faculty mentors together with a select group of 34 jazz composers to explore new directions in orchestral writing.

A strong visual thinker, Bloom's affinity for other art forms has lead to collaborations with other innovative artists. She has curated a discussion/ performance series on improvisation at the Philoctetes Center for the Multi-Disciplinary Study of Imagination in NYC, presenting programs that included performing with legendary dancer/ choreographer Carmen deLavallade (Moving & Playing: Jazz Improvisation & Dance) and pianist Fred Hersch (The Art of the Ballad). Videos of the events can be viewed at http://philoctetes.org/past_programs/. She also scored the music for the “Feiffer Dancer Films” – a series of short films that re-imagine cartoonist Jules Feiffer’s “modern dancer” character based on dances developed during a 2009 residency at the Baryshnikov Arts Center.

A new jazz festival in Brooklyn, NY featuring cutting edge woman artists was named in her honor (The Bloom Festival). She has been recording and producing original music since 1977, founding her own record label and publishing company (Outline Music) in 1976 and later recording for ENJA, CBS, Arabesque, and Artistshare Records. She’s currently a professor at the New School for Jazz & Contemporary Music in New York City. Perched on the edge of the contemporary jazz, "Wingwalker" puts Bloom’s musical imagination on display, crafting moments of beauty and adventure.

Jane appeared with her quartet in New York City at Cornelia Street Café, 29 Cornelia Street in Greenwich Village on Sunday, Jan 23 at 8:30pm to announce the release of "Wingwalker," already available on www.amazon.com Don't miss this fascinating journey!
Posted by Arnaldo DeSouteiro at 5:04 AM