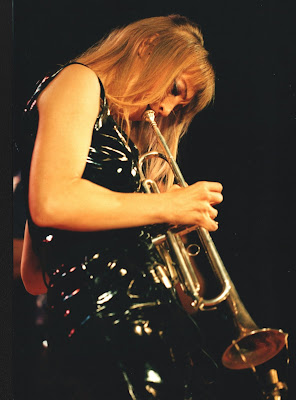 Saskia Laroo, one of our favorite trumpeters in the world, talks about her upcoming performance highlights for 2011:
"Next Wednesday, Feb 8, we leave for a 9-day India Tour with Dutch Jazz Expedition.
In March I will do some clubbing with Dutch male and female deejays in the Netherlands and perhaps in Lithuania.
In April I will appear in the US, a.o. in Flushing, NYC & Middletown, CT with the Afro-Semitic Experience & perhaps do a Brazilian tour with Jazzkia, my acoustic jazz band.
Then, in May I will be appearing with my groups the Saskia Laroo Band and duo Laroo & Byrd at the Amersfoort Jazz Festival--now an international event--and will make plans for some more possible Dutch Jazz Expeditions.

She also remembers some highlights from a recent past:
"In January 2011, I did my first APAP participation in New York;
In November 2010, I received the Indian Karmaveer Puraskaar Peace Award form the ICongo Organisation, with support of Jazz Heritage;
Also in November 2010, a Salsabop tour through India for Jazz Utsav Festival and more, with support of the NPK;
In September and October, we toured with the Duo Laroo & Byrd in Hong Kong and in Thailand with the Dutch jazz Expedition, and performed a concert with the Saskia Laroo Band in Moldavia for the Dutch Weekend."

You go, girl!
Posted by Arnaldo DeSouteiro at 5:50 AM