CD of the Week - "The Either/Orchestra: Mood Music for Time Travellers" 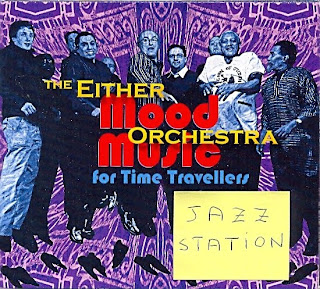 CD of the Week
The Either/Orchestra: "Mood Music for Time Travellers" (Accurate)

A must-have item for anyone really interested in being up-to-date with contemporary jazz. Inventiviness, originality, great tunes, outstanding arrangements, amazing solos. What else could a jazz lover ask for?

For 25 years, Boston's Either/Orchestra has been serving up musical repasts of savory, ever-evolving ingredients. Incorporating elements of American/Latin/Caribbean jazz and Ethiopian music with the big band format and the capacious musical vision of founder Russ Gershon, the 10-piece ensemble has long embraced a global array of influences and explored unforeseen improvisational frontiers.

Now, marking their silver anniversary with the release of their first CD in five years ("Mood Music for Time Travellers") and a series of celebratory shows and events, the Either/Orchestra is in its creative prime, a venerable institution that's still hungry for new sounds.

"I'm proud of the continuing achievements of the talented and creative musicians who have come through the E/O," says saxophonist/composer Gershon. "And what's really wonderful about working with these great players is how each one has left his mark on what we play and how we play it to this day."

"I wanted to hear a band like this one," recalls Gershon, thinking about the E/O's origins. "I was hearing the Gil Evans Orchestra regularly in the early 80s in New York at Sweet Basil. I loved the combination of expansive horn section writing with a large and raucous rhythm section, and the way Gil would let his amazing soloists take over the band. I remember thinking I'd like to hear sounds like that in Boston, so I didn't have to come to New York every time I wanted the experience."

The group's debut performance on December 17, 1985 at the Cambridge Public Library was something of a sensation, and with the release of its first album, 1987's "Dial 'E' for Either/Orchestra," the group quickly gained national stature as one of the most original new units on the scene.

Over the years, Gershon took the band on the road for a series of extended tours, "which enabled us to make quantum leaps forward" creatively, and formed his own label, Accurate Records, which quickly took on an essential role documenting Boston's progressive jazz scene, including the E/O's critically acclaimed albums: "Radium" (1988), "The Half-Life of Desire" (1990), "The Calculus of Pleasure" (1992), "More Beautiful Than Death" (2000, the start of E/O's ongoing Ethiopian odyssey), and "Afro-Cubism" (2002). The E/O's collaboration with Berklee-trained Ethio-jazz pioneer Mulatu Astatke and other Ethiopian stars was captured on "Live in Addis" (2005, Ethiopiques 20).

In June of 2010, Gershon and the Either/Orchestra were awarded a Chamber Music America "Jazz New Works and Ensemble Development" grant for an as-yet-unwritten suite of pieces to be performed and recorded. The band released their eleventh album, "Mood Music for Time Travellers"; completed a video of the CD's lead track, "The (One of a Kind) Shimmy"; and appeared at the Chicago Jazz Festival in September with special guest Teshome Mitiku.

Coming up in the spring are concerts with Ethiopian superstar Mahmoud Ahmed (at Amherst [MA] College on 3/25 and the Regattabar in Cambridge on 3/24 or 3/26); and a 5/13 appearance at the Ethiopian Music Festival in Addis Ababa, with the E/O performing the music of Armenian maestro Nerses Nalbandian. The E/O will return home with a 5/26 appearance at Scullers in Boston.

"Preparing for the 25th anniversary concerts," says Gershon, "it's fascinating for me to search through our library of old music and old recordings, and see the interweaving of musical ideas, the career paths of so many wonderful musicians, and the evolution of jazz itself over the lifespan of the band, which actually covers a quarter of the history of jazz. We intend to bring all of these elements together into entertaining, edifying, and emotional shows over this coming season."
Posted by Arnaldo DeSouteiro at 4:21 PM