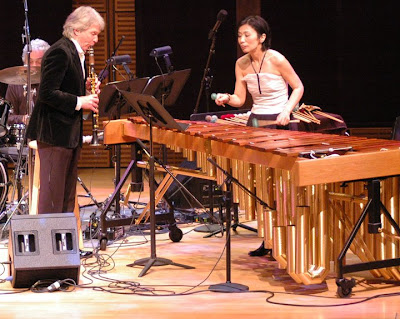 Ms. Yoshida has performed acclaimed solo recitals in New York, at Carnegie Hall’s Zankel Hall in 2007 and Weill Recital Hall in 2001 and 2004. She performed in Tokyo in 2001, 2003, and 2006, as well as in several other cities around the world. She continues to collaborate with Steve Gadd (drums), Richard Stoltzman (clarinet), Eddie Gomez (bass), NEXUS (percussion), Bill Douglas (piano, composer), Thomas Stacy (English horn), Kakraba Lobi (African gyil), Stomu Yamash’ta (percussion),Takahashi Chikuzan (Tsugarushamisen), and numerous other talented musicians. In recent praise, Mark Swed of the LA Times wrote, “In Japan, there is a high-wire jazz marimbist, Mika Yoshida. A recently released DVD, Mika Marimba Madness (what else?), of her in concert last year reveals an amazing, energetic performer ready for major exposure.” John Henry of Audiophile Audition wrote, “Haven’t heard great jazz marimba like this since hearing Red Norvo live once.”

Richard Stoltzman’s virtuosity, musicianship, and sheer personal magnetism have made him one of today’s most sought-after concert artists. As a soloist with over a hundred orchestras, a captivating recitalist, an innovative jazz artist, and a prolific recording artist, this two-time Grammy winner has defied categorization, dazzling critics and audiences alike throughout many musical genres. Mr. Stoltzman’s unique way with the clarinet has earned him an international reputation as he has opened up possibilities for the instrument that no one could have predicted. He gave the first clarinet recitals at both the Hollywood Bowl and Carnegie Hall, and became the first wind player to receive the Avery Fisher Prize.

He has performed or recorded with such jazz and pop greats as Gary Burton, Chick Corea, Judy Collins, Eddie Gomez, Woody Herman, Keith Jarrett, Mel Torme, and Spyro Gyra-founder Jeremy Wall. His commitment to new music has resulted in numerous premieres, including acclaimed clarinet works by Steve Reich, Toru Takemitsu, Stephen Hartke, and Einojuhani Rautavaara. Richard Stoltzman’s discography numbers well over 60 recordings, and he has won Grammy Awards for his recordings of the Brahms Sonatas with Richard Goode and Trios of Mozart, Beethoven, and Brahms with Yo-Yo Ma and Emanuel Ax.
*******
(Le) Poisson Rouge is a multimedia art cabaret founded by musicians on the site of the historic Village Gate. Dedicated to the fusion of popular and art cultures in music, film, theater, dance, and fine art, the venue's mission is to revive the symbiotic relationship between art and revelry; to establish a creative asylum for both artists and audiences.

LPR prides itself in offering the highest quality eclectic programming, impeccable acoustics, and bold design. The state-of-the art performance space, engineered by the legendary John Storyk/WSDG, offers full flexibility in multiple configurations: seated, standing, in-the-round, and numerous alternative arrangements. The adjoining lounge is open during the day as a café, and at night as a secondary bar and event space. A work of art itself, the physical facilities are the embodiment of the experimental philosophy that drives the venue.

LPR is a source you can trust for exposure to visionary work, people of character, and a consistently dynamic environment. We invite you to immerse yourself in a nightlife of true substance and vitality. Bring open mind and drinking shoes.
Posted by Arnaldo DeSouteiro at 6:39 AM