Instrumental CD Reissue of the Month - "Ron Carter: All Blues" 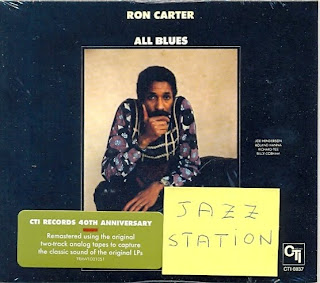 Released in early 1974, but recorded in a single day session on October 24, 1973, apparently with no out-takes, "All Blues," Ron Carter's second solo album for CTI, makes its debut on CD in the USA (it was previously reissued only in Japan). Ron, heard on both acoustic & piccolo basses, leads an impeccable quartet with Roland Hanna (acoustic piano), Billy Cobham (drums, plus tambourine on "117 Special" only) and Joe Henderson's glorious tenor sax, with Richard Tee (Fender Rhodes) guesting on the lightly funky "117 Special."

Top tracks: "Light Blue" (actually, a haunting ballad that fits like a glove for Hanna's romantic Chopinesque style), "Rufus," Miles Davis' "All Blues" and Matt Dennis/Tom Adair's standard "Will You Still Be Mine," (originally a hit for the Tommy Dorsey Orchestra in 1941, with vocalist Connie Haines) and here turned into solo number for the leader. Ron Carter was voted Bassist of the Year in Downbeat’s Readers’ Poll in 1973, 1974 and 1975, highlighting his work with CTI.

It's also interesting the note the low-profile concept of the cover conceived by CTI's art director Bob Ciano for this album, in perfect sync with the mainstream jazz mood of its content, using a discreet pic by master photographer Alen Mac Weeney in the front cover, instead of the usual Pete Turner's exuberant shots. And, curiously, the liner photo (by Dean Brown) doesn't comes from the recording session, but from a live concert performed by Ron as a member of the CTI All Stars some months earlier.

"All Blues - Ron Carter: Bassist Ron Carter had long been Creed Taylor’s first-choice bassist on record dates stretching as far back to the classic Gil Evans recording Out of the Cool in 1960. Carter was the first bass choice for many Creed Taylor productions throughout the 1960s for the Impulse, Verve, MGM and A&M/CTI labels, even while the bassist was recording and touring as part of the Miles Davis Quintet. And it was Ron Carter’s dulcet tones and swinging accompaniment on the double bass that drove nearly every CTI album since 1970 into the overdrive that its soloists are often given sole credit for.

Surprisingly, though, Ron Carter’s second CTI recording, All Blues, fell well below the radar. It was hardly noticed when it was first issued in early 1974 (his 1973 CTI debut, Blues Farm, which was hardly a hit, still remains better known). And despite four previous CD releases in Japan, All Blues has never had a domestic release on CD, making it one of the least known of all the bassist’s solo albums.

Interestingly, it’s probably among the best of the albums the bassist waxed for the CTI label between 1973 and 1976. This is due in no small measure to the commanding presence of tenor saxophonist Joe Henderson on “A Feeling,” “117 Special,” “Rufus” and “All Blues.”

Henderson had played with the bassist as far back as 1965 (with Woody Shaw) and on later dates with Herbie Hancock, Duke Pearson, McCoy Tyner, Alice Coltrane and Bill Evans as well as on the saxophonist’s own Mode For Joe, The Kicker, Tetragon, Power to the People and Black is the Color.

Carter and Henderson had also appeared together on Freddie Hubbard’s CTI classic Red Clay and the trumpeter’s follow-up Straight Life, while Henderson had previous CTI connections on George Benson’s Tell It Like It Is.

Carter here also solidifies a simpatico musical kinship with pianist Roland Hanna, who he’d first played with on a European tour in 1969. The two would combine forces shortly hereafter with drummer Ben Riley (on a record for a different label with Phil Woods) to form the short-lived New York Jazz Quartet, which would later cut several records for CTI’s subsidiary label, Salvation.

They would, of course, also be heard together on Jim Hall’s Concierto, which is one of the stand-out releases in this batch of CTI celebrations. Hanna is especially featured on the florid trio feature, “Light Blue” (not the Monk piece), as well as Carter’s bop-y “Rufus” (not the Archie Shepp piece – recorded again by Carter on his album Etudes).

Not surprisingly, Ron Carter dominates the proceedings, with his especially distinctive bass helming any number of attractive solo features (not to mention the overdubbed bass “solo” of “Will You Be Mine”). Hanna steps down for “117 Special,” surely the album’s musical highlight (and recorded again by Carter on his 1999 disc Orfeu), to be replaced by electric pianist Richard Tee, who resumes his role from Carter’s CTI debut Blues Farm.

“All Blues,” of course, is the famed tune from Miles Davis’ landmark Kind of Blue (Columbia, 1959). As bassist in the Davis band from 1963-70, Ron Carter was surely familiar with the tune, having recorded it with the trumpeter often between 1963 and the historic Plugged Nickel dates of late 1965 (Carter recorded the tune several more times after this, notably with pianists Hank Jones and Kenny Barron).

But this performance of the tune absolutely defers to Carter’s mastery of not only the melody but the form. It is one of several special performances captured here, and surely among one of the classics in the CTI catalog."
Posted by Arnaldo DeSouteiro at 5:05 AM