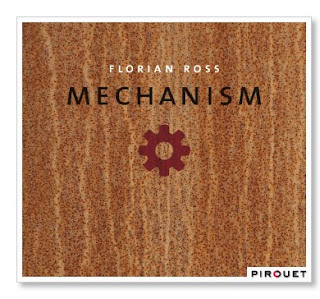 Produced by Florian Ross & Jason Seizer, it's a sublime and perfect album. Florian Ross is a poet, like Bill Evans. Romantic, but never mellow. It's impossible to mention highlights among the 17 beautiful tracks of "Mechanism." Ross himself composed 15 of them. The remaining two are very personal visions of "Sometime Ago" (not the Chick Corea tune of the Return To Forever era, but the gorgeous theme by Argentinian composer Sergio Mihanovich, made famous by Bill Evans who recorded/played it several times) and John Coltrane's post-bop anthem "Moment's Notice," heard here on its most lovely rendition ever.

"Mechanism" - a zestful inner-exchange of monologues and self-dialogues. Florian Ross's first CD as solo-pianist is a recording of poetic beauty and subtle self-assurance: piano music of astounding variety and at the same time uncanny homogeneity; music filled with substance and soul.

Florian Ross is not just a pianist; he is also a composer, an arranger and a shaper of sounds. As such he has made a name for himself throughout Europe over the last decade. His creativity and virtuosity has earned Ross, who was born in Pforzheim, Germany in 1972, numerous honours, including first prize at the Danish Radio Big Band's Thad Jones competition, and in 2006 he received the WDR's (West German Radio) jazz prize for composition.

Germany's Goethe Institute sent him as exemplary cultural export to Asia, South Africa, and Central America. And he teaches at renowned music conservatories in six German cities. Florian Ross is a masterful arranger, as he has a deep understanding of how to combine the various instruments into unusually sophisticated voicings.

Whether for the Vancouver Jazz Orchestra, the BMI Jazz Orchestra, or the Metropole Orkest (he recently scored one track for John Scofield's "54" album), when it is about transforming large bodies of sound into lean polychromatic music, then Florian Ross is the one to call. This is his first CD as solo pianist and his debut session on Pirouet Records. Hope many more will come.
Posted by Arnaldo DeSouteiro at 3:05 AM