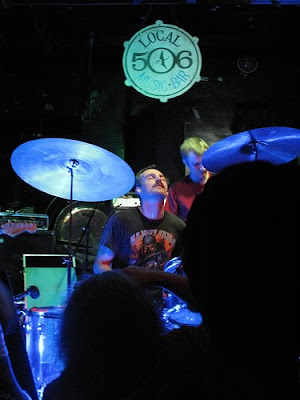 We were shocked to learn of the tragic passing of Jerry Fuchs this past Sunday morning in Williamsburg, NYC.

The musician, who was 34, died after a fall at a fundraising party at 338 Berry Street shortly after 12:30am on November 8 morning, reports theNew York Post. According to sources at the party, Fuchs and a friend had attempted to leap over a gap between an elevator and the building's fifth floor after a malfunction. He fell in the gap due to his clothing becoming caught on the elevator, falling down to his death. He was pronounced dead at 3:30am after being taken to Bellevue Hospital.

Jerry was an incredible musician, drumming for a slew of bands like Maserati, the Juan MacLean, LCD Soundsytem, Turing Machine and !!!, to name but a few, and a close friend to many. This is certainly a terrrible loss for his family and friends, and the music community at large. His presence and talent will be sorely missed.
Posted by Arnaldo DeSouteiro at 5:30 AM