Tonight, November 30th, jazz diva Diana Krall, voted Best Female Singer of the Year in the 2009 DownBeat Readers Poll, brings her artistry to the Great Hall of the Moscow P.I. Tchaikovsky Conservatory (Bolshaya Nikitskaya, 13, Moscow, RU 125009), in Russia.
Buy Tickets
It's the last concert of the triumphant "Quiet Nights World Marathon 2009." DK will be back on the road in February 2010, taking the beautiful repertoire of both the "Quiet Nights" CD (Verve) and the "Live in Rio" DVD (Eagle/ST2) to Australia and New Zealand.

Press-release:
The Great Hall of the Moscow Peter Ilitch Conservatory is one of the most famous concert venues not only in Moscow and Russia but in the world – thanks to its wonderful decoration, comfortable location and – which is the most important for the musicians – perfect acoustics.
It was opened on April 7, 1901.

The building was made under the project of architect V. Zagorsky. The Hall’s famous façade was a feature of the building previously staying there – a house of Russian princess Ekaterina Dashkova which was built on this place in the end of the 18th century.

A big part of the whole work – from the furniture and carpets to the organ of Paris «А. Cavaille-Coll» company (1899) presently staying in the Hall – was funded by Russian patrons of arts. The organ of the Hall was regarded as one of the best organ in the world during the Paris exhibition of 1900. Great Hall for Moscow is much bigger then a concert hall only. During the First World War (1915 – 1917) it was a hospital here, and in a period of 1924 – 1933 at daytime the Hall was used as a popular movie theatre.

Since 1940 the Conservatory was named after Russian composer Pyotr Tchaikovsky, and in 1954 the monument to him was opened in front of the Great Hall.

The best soloists, orchestras and ensembles of the world play their concerts here. A number of international festival and competitions take place at the Great Hall, and among them there is the most famous in the world Tchaikovsky Competition. And it is considered as the most favorite hall in Moscow.

Now the Great Hall building is known as the Nikolay Rubinstein building (formerly the Fourth study building of the Moscow conservatory).
Capacity: 1737 seats. 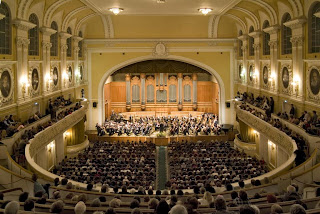 Posted by Arnaldo DeSouteiro at 6:56 AM