I was fortunate to attend many great concerts at Art D'Lugoff's famed Village Gate, where some great albums were recorded by such artists as Nina Simone, Herbie Mann, Chris Connor and Horace Silver, amongst others. My personal favorite one is "Sivuca Live at the Village Gate" (Vanguard), a masterpiece which includes superb versions of such songs as Sivuca/Humberto Teixeira's "Adeus Maria Fulô," Ary Barroso's "Rancho Fundo" (transformed in a mini-concerto for accordion & flute, with awesome solos by Sivuca and South African reedman Morris Goldberg), Dorival Caymmi's "Marina" (featuring vocalist Cindy Kimball) and an explosive groovy take on Bill Withers' "Ain't No Sunshine" which later became a dancefloor hit in the acid-jazz scene. It's a shame that this album has been reissued on CD only in Japan. 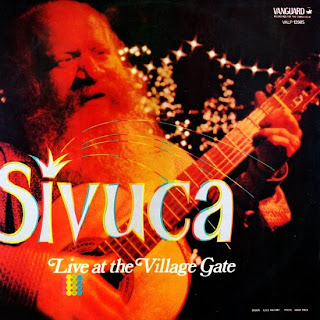 Art D'Lugoff, who was widely regarded as the dean of New York nightclub impresarios and whose storied spot, the Village Gate, was for more than 30 years home to performers as celebrated, and diverse, as Duke Ellington, Allen Ginsberg and John Belushi, died on Wednesday in Manhattan. He was 85 and lived in the Riverdale section of the Bronx.

The cause has not been determined, said Mr. D'Lugoff's brother, Burt, a medical doctor and frequent silent partner in his joyously noisy endeavors. Mr. D'Lugoff died at the Allen Hospital of New York-Presbyterian Hospital, where he had been taken on Wednesday after experiencing shortness of breath.

Opened in 1958, the Village Gate was on the corner of Bleecker and Thompson Streets. The cavernous basement space it occupied -- the building's upper floors were then a flophouse -- had once been a laundry.

Mr. D'Lugoff later expanded to the upper floors, and in its heyday the Gate comprised the basement space, used primarily for live music of all kinds; a street-level terrace for jazz; and the Top of the Gate, an upper-story performance space.

The club closed its doors in 1994, amid rising rents, a changing market for live music and the aftermath of some unsuccessful investments by Mr. D'Lugoff. It briefly reappeared on West 52nd Street in 1996 but sputtered out after less than a year.

Mr. D'Lugoff was also a producer of Off Broadway shows -- most at the Gate -- and helped conceive the National Jazz Museum in Harlem.

The Gate may have lacked the cachet of the Village Vanguard, a more intimate West Village club, but it was a bright star in the city's cultural firmament for decades. A young Woody Allen did stand-up comedy there. The playwright-to-be Sam Shepard bused tables there. A waiter named Dustin Hoffman was fired there for being so engrossed in the performances that he neglected his customers, though service was by all accounts never the club's strength. Dozens of albums were recorded there, by musicians like Pete Seeger and Nina Simone and by comics like Dick Gregory.

Though most often thought of as a jazz space -- among the eminences heard there over the years were John Coltrane, Miles Davis and Thelonious Monk -- the Gate offered nearly every type of performance imaginable. There were blues artists like B. B. King; soul singers like Aretha Franklin; rockers like Jimi Hendrix; comics like Mort Sahl and Richard Pryor; and Beat poets. There was the harmonica virtuoso Larry Adler; the odd classical recital (the composer Edgard Varese gave the American premiere of his "Poeme Electronique" there); and a duck, Hermione, who performed in the musical "Scrambled Feet," which opened there in 1979.

Over the years the club also earned a reputation as an important Off Broadway theater space, presenting shows like "MacBird!" (1967), the Vietnam-era political satire; the revue "Jacques Brel Is Alive and Well and Living in Paris," which had its premiere there in 1968; and "One Mo' Time," the musical about black vaudeville that opened in 1979.

For many patrons, as for Mr. D'Lugoff himself, the Gate's eclecticism was at the heart of its charm. One of his most celebrated offerings was Salsa Meets Jazz, a regular series in the 1970s that paired great Latin artists like Machito and Tito Puente with jazz titans like Dexter Gordon and Dizzy Gillespie.

But sometimes the fare grew too varied even for Mr. D'Lugoff, as he told The New York Times in 1988. "I used to put together a lot of unlikely combinations to appeal to a bigger audience," he said. "Once we had Nina Simone, Dick Gregory and Larry Adler all on the same bill and had so much trouble deciding who would open that I went across the street and hired a guitarist."

Arthur Joshua Dlugoff was born in Harlem on Aug. 2, 1924, the son of Raphael Dlugoff, who ran a vacuum-cleaner and sewing-machine repair shop, and the former Rachel Mandelbaum. (Art later added an apostrophe to his surname as a pronunciation aid.)

Reared in Brooklyn, Mr. D'Lugoff served with the Army Air Forces in China in World War II. He later earned a bachelor's in literature and economics from New York University and attended law school there for one year.

For the next few years Mr. D'Lugoff enjoyed a career as eclectic as any of his concert bills, working as an encyclopedia salesman, a waiter in borscht belt hotels, a cab driver in Los Angeles, a tree surgeon's assistant in upstate New York and a union organizer in Massachusetts and Kentucky. Returning to New York, he embarked on a career as a concert promoter, presenting calypso, folk and jazz artists around the city.

He soon wanted his own space, and the Village Gate was born. (The name stemmed from the fact that early on, patrons entered through a metal gate on Thompson Street to avoid the flophouse traffic on Bleecker.)

Besides his brother, Burt, of Baltimore, Mr. D'Lugoff is survived by his wife, the former Avital Achai; a son, Raphael; three daughters, Sharon D'Lugoff Blythe, Dahlia D'Lugoff and Rashi D'Lugoff; and five grandchildren.

One secret of the Gate's success was Mr. D'Lugoff's eye for what the public wished to see. This was perhaps nowhere more evident than in "Let My People Come," which opened there in 1974. Subtitled "A Sexual Musical," it was all singing, all dancing and almost all naked, male and female, from top to toe.

The State Liquor Authority would have none of this. Where spirit was on offer, it decreed, the flesh should not be. In a protracted battle that engendered much coverage in the news media, it lifted the Gate's liquor license.Mr. D'Lugoff went to court, the license was reinstated and the show ran for two and a half years. 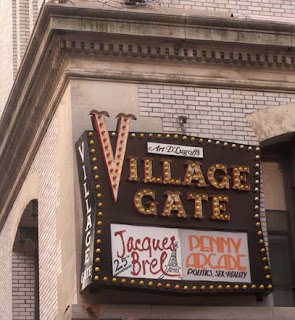 Art D'Lugoff was one of those colorful, outspoken New York showmen and raconteurs who could have stepped right out of "Guys and Dolls" -- only he also had a social conscience in his pocket.

As owner and ruler of the Village Gate nightclub for 38 years, he hired Paul Robeson, fired Dustin Hoffman and generally provided aid and comfort to many of the biggest and most controversial names in jazz, theater, comedy, folk music and the counterculture.

D'Lugoff died Wednesday of a heart attack. He was 85 -- and two days earlier, said his long-time friend Doug Yeager, he was in Soho looking at potential spaces for a new club.

D'Lugoff had been ill for several months as a result of complications from a hip replacement. But to the end, said Yeager, "He was still shaking the trees.

"He was as caring a friend as I could have. I will miss his calls, his mischievous smile and the warmth of his spirit."

D'Lugoff launched his promotion career in the 1950s after returning from World War II service in China. He opened The Gate in 1958 at Bleecker and Thompson Sts., where it remained until he had to close it in 1996.

The Gate became his primary venue, but when artists got too big for his basement and first floor spaces, he would take them to other venues like Carnegie Hall.

His bookings at times were a statement of his political beliefs.

When Robeson and Pete Seeger were blacklisted in the 1950s, D'Lugoff booked them. He presented the bitterly anti-war play "MacBird" in 1967 and hired comedian Lenny Bruce when he knew police would be in the crowd waiting for an excuse to arrest him.

But in a 1983 interview, D'Lugoff said most of his artists were booked "because I liked them."

He booked comedians like Bill Cosby and Mort Sahl, and from 1971 to 1973 the Gate hosted "National Lampoon's Lemmings," a revue with a cast that included future "Saturday Night Live" stars John Belushi and Chevy Chase.

The show "Jacques Brel Is Alive and Well in Paris" debuted at the Gate in 1968, and Aretha Franklin made her first New York concert appearance there. In 1970, Jimi Hendrix played a benefit show at the Gate for Timothy Leary.

In the early '80s D'Lugoff coaxed satirist Tom Lehrer out of retirement so D'Lugoff could present a review of Lehrer songs called "Tomfoolery." A few years later he put together a tribute show to comedian Sid Caesar, another of his 1950s idols.

Long-standing Village legend says that D'Lugoff turned down a young Bob Dylan as a potential stage act, but that Dylan still ended up writing "A Hard Rain's Gonna Fall" in the Gate basement.

D'Lugoff fired Hoffman when the then-struggling young actor was a waiter at the Gate. Hoffman told Playboy years later that he got so enchanted by the music that he would forget about his customers.

A New Yorker in style and attitude, D'Lugoff had a kind of beatnik appearance, slender and bearded. He had a droll sense of humor, loved show business stories and was never shy about offering an opinion.

One of his hardest and most important fights, he said in early 1990s, was keeping the Village a vibrant part of city cultural life.

"We need the clubs," he said. "But unless you've got a great landlord, sometimes everything seems to be working to force them out."

He also championed the historical project that became the National Jazz Museum of Harlem and had worked with the National Folk Music Museum, which is currently in development.

He married his wife, photographer Avital Achai, in 1957, and they had four children: Sharon, Dahli, Racheal and Raphael. All survive him.

Yeager said plans will be announced soon for a memorial service.
Posted by Arnaldo DeSouteiro at 4:26 AM