On his outstanding CD debut as a leader, "Into the Light," Hall chose to feature his working band, a versatile and simpatico unit that shares his penchant for a broad stylistic range and "trying to go to the 21st century," rather than playing "like it's 1964 all the time." Recorded in a single Sunday afternoon earlier this year, with most of the tunes first takes, the CD will be released in the USA by Origin Records on November 17.

"'Into the Light' means a number of different things," says Hall. "It sort of has a religious connotation, when people think of going into the light and what they see when they're at the end of their lives. It can also mean just going into the unknown and having the courage and skill set to explore the unknown. And it can mean someone who's usually a sideman stepping out as a leader and stepping into the light as a composer, which is something a lot of people don't know about me."

Though the disc leads off with Herbie Hancock's "I Have a Dream," and closes with compositions by Whitaker and Warfield, Into the Light places Hall's writing at the heart of the proceedings -- six originals including the ballad "Orchids"; "The Path to Love," a mid-tempo swinger; and "Jabali," an adventurous suite named for drummer Billy Hart. Hall was inspired by great drummers like Jeff Watts, Victor Lewis, Max Roach, and Billy Higgins who "thought about compositions and conceptualizing a recording from the first song through the last song, not just about showing off some great drum stuff." 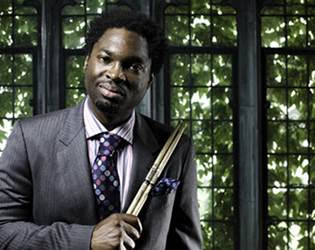 Born in Brooklyn and raised in Philadelphia, the 40-year-old Hall studied aerospace engineering and percussion at Iowa State University. He spent two years with the Boeing Company before committing to music full-time. That decision led to a move to New York City in 1991, and for the next several years Hall freelanced with Roy Hargrove, Betty Carter, Joshua Redman, and George Coleman, among others.

Based in Chicago since 1994, Hall is an Assistant Professor of Music at the University of Illinois at Urbana-Champaign, and is pursuing a doctorate in ethnomusicology at the University of Chicago. (The subject of his dissertation is the soul music of Philadelphia and its relationship to the Black Power Movement.) The drummer has worked with Chicagoans such as Von Freeman, Malachi Thompson, Bobby Broom, Patricia Barber, and Kurt Elling, and for the last 15 years with the Chicago Jazz Ensemble, serving as its music director for the past two.

Dana Hall's newest role is as a bandleader promoting a new CD with his favorite group of musicians. The quintet will appear in Cincinnati, at the Blue Wisp (1/29-30), with a hometown CD release event at the Green Mill 2/5-6; other bookings, in Cleveland, Washington DC, and New York, are being finalized. "Into the Light" has provided Hall and his band the opportunity "to finally document what we've been doing," says Hall. "Now we'll see if we can get some momentum going from that." Hall's musicianship, energy, and vision make momentum -- and exciting music -- inevitable.