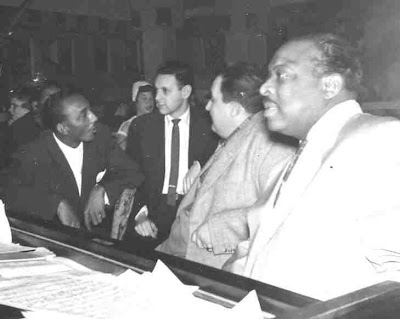 Dick Katz, a pianist, record producer, educator and writer whose knowledge of jazz from the stride-piano era to 1960s modernism made him a valuable presence on New York's jazz scene for six decades, died on Tuesday in Manhattan. He was 85.

The cause was lung cancer, said his son Jamie.

One of his breakthrough moments was his role as pianist on the saxophonist and composer Benny Carter's 1961 album "Further Definitions," meshing with a first-class multigenerational crew including swing-era veterans and younger musicians. Another was his 1965 collaboration with the singer Helen Merrill, "The Feeling Is Mutual," an arty, cooled-out album of jazz standards of which he was co-leader, arranger and producer.

Richard Aaron Katz, born in Baltimore on March 13, 1924, was already playing in local clubs there as a teenager before he left for the University of North Carolina to study music. He joined the Navy in 1942 and fought in the battle of Saipan; in 1946 he became a professional musician in New York.

While working for his father's advertising agency, he studied at the Manhattan School of Music, where John Lewis, later of the Modern Jazz Quartet, was a fellow student. In 1950 he took private lessons with Wilson. By the early 1950s he was performing regularly with the clarinetist Tony Scott's group at Minton's Playhouse in Harlem and making a string of records with Mr. Scott, including "Music After Midnight" and "Jazz for G.I.'s."

For several years in the mid-'50s, Mr. Katz played in the house rhythm section at the Cafe Bohemia in the West Village with the bassist Oscar Pettiford and the drummer Kenny Clarke, backing Miles Davis, among others. He also toured with the popular twin-trombone band led by J. J. Johnson and Kai Winding and played with the trumpeter Kenny Dorham's Jazz Prophets.

His old friend Lewis helped Mr. Katz secure a record deal with Atlantic in 1958, which resulted in the album "Piano and Pen." Through the '50s and '60s he appeared frequently as a sideman, on records by the vocalist Carmen McRae, the saxophonist Sonny Rollins and others. Starting in the late '60s, two of his most frequent collaborators were the trumpeter Roy Eldridge and the saxophonist Lee Konitz -- brilliant players on opposite chronological sides of bebop, jazz's great stylistic divide.

In 1966 Mr. Katz and the veteran record producer Orrin Keepnews founded the jazz label Milestone. Staying with the company until the early '70s, he produced records by Mr. Konitz and others, as well as "Alone Together," a highly regarded duet album by the guitarist Jim Hall and the bassist Ron Carter.

Beginning in the middle '80s Mr. Katz worked with the American Jazz Orchestra, a repertory ensemble directed by Lewis, and the saxophonist Loren Schoenberg's big band. From the '80s onward he taught at the New School, the Manhattan School of Music and Jazz at Lincoln Center.

Mr. Katz was also among a select group of jazz musicians who wrote well about their art. His astute essays about Davis and Tatum in The Jazz Review, published in 1959 and 1960, led to other writings, for books and album liner notes. He received Grammy Award nominations for the notes he wrote for "Jazz Piano: A Smithsonian Collection" (1990) and "The Complete Capitol Recordings of the Nat King Cole Trio" (1993).

Mr. Katz's first marriage, to the former Edith Shapiro, ended in divorce. He is survived by his wife, the former Joan Seifer, as well as four sons -- Jamie and Frank, of Manhattan; Jeffrey, of Washington; and Ivan, of Brooklyn -- and two grandchildren.

Jazz historian Marc Myers published, some months ago, an excellent interview with Katz:
http://www.jazzwax.com/2009/07/interview-dick-katz.html
Posted by Arnaldo DeSouteiro at 9:09 AM