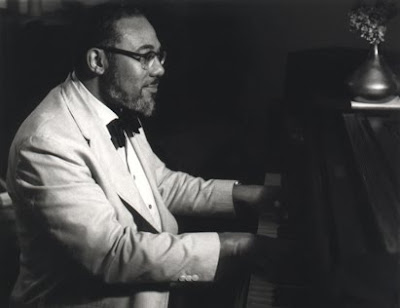 Hale Smith, Who Broke Borders of Classical and Jazz, Is Dead at 84
By WILLIAM GRIMES, NY Times
A version of this article appeared in print on November 28, 2009, on page D6 of the New York edition.

Hale Smith, a classical composer who also worked as a performer and arranger with jazz greats like Dizzy Gillespie, Ahmad Jamal and Chico Hamilton, died Tuesday at his home in Freeport, L.I. He was 84.

The cause was complications of a stroke, said his wife, Juanita.

Mr. Smith, who wryly described himself to The New York Times in 1990 as “one of America’s most famous unknown composers,” straddled the two worlds of jazz and classical music as a performer, composer, arranger and teacher. From his early teens, he played jazz piano in the nightclubs of Cleveland, his hometown, but he went on to study classical composition and achieve a national reputation for an eclectic oeuvre and his synthesis of jazz and 12-tone technique.

He composed serial-influenced works like “Contours for Orchestra” (1961) and “Ritual and Incantations” (1974), lyrical works like the song cycle “The Valley Wind” (1952) and jingles and incidental music for radio, television and theater. With the drummer Chico Hamilton, he composed the film score for “Mr. Ricco” (1975), and his skill as an orchestrator led to a series of collaborations with the pianist Ahmad Jamal.

Mr. Smith was born on June 29, 1925, in Cleveland, where his father owned a printing shop. He began studying piano at 7 and played mellophone in his high school band. At 16, he showed enough talent as a composer to attract the interest of Duke Ellington, who, after being shown one of his compositions, sat down with him to offer advice.

After being drafted into the Army in 1943, he arranged the music for shows touring Army camps in Florida and Georgia. Mr. Smith, who was black, told The Times, “I served on the third front, the American South.”

On leaving the service in 1945 he enrolled in the Cleveland Institute of Music, where he studied composition with the serialist Marcel Dick and theory with Ward Lewis. He earned a bachelor’s degree in 1950 and a master’s in 1952. That year his “Four Songs” won the music licensing organization BMI’s first student composer award.

In 1948 he married Juanita Hancock. In addition to his wife, he is survived by a daughter, Robin, of Manhattan; three sons, Michael, of Freeport; Eric, of York, Pa.; and Marcel, of Harpursville, N.Y.; and three grandchildren.

Mr. Smith moved to New York in 1958 and found work as an editor and consultant at several music publishing houses. He also taught at the C.W. Post campus of Long Island University, in Brookville, and at the University of Connecticut in Storrs, from which he retired in 1984.

Eclectic in his tastes and interests, Mr. Smith composed works that ranged from the richly dissonant orchestral composition “Innerflexions” (1977) to “Dialogues and Commentary” (1990-91), a witty set of variations for septet on a single motif. His arrangements of spirituals were performed often by the sopranos Kathleen Battle and Jessye Norman.

In 2000, Composers Recordings released a survey of his work, “Music of Hale Smith.”

Although Mr. Smith, an adviser for the Center for Black Music Research in Chicago, was routinely listed among the leading black composers of his day, he bristled at the designation. He wanted his work, and that of his black peers, to appear on programs with that of Beethoven, Mozart and Copland.

“We don’t even have to be called black,” he wrote in an article in 1971. “When we stand for our bows, that fact will become clear when it should — after the music has made its own impact.”

A version of this article appeared in print on November 28, 2009, on page D6 of the New York edition.
Posted by Arnaldo DeSouteiro at 8:37 AM