Vocal CD of the Month - "Kurt Elling: The Gate" 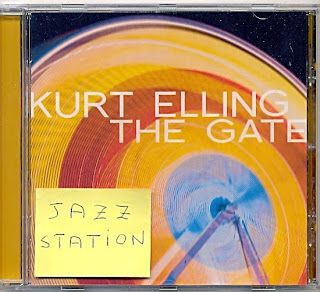 Kurt Elling's "The Gate" is his most provocative, hippest and coolest recording to date. Produced by the Grammy-winning Don Was, this nine-track set features the vocalist providing singing lessons (in terms of creative phrasing, astounding breath control, gorgeous tone, and the use of silence as a musical element) in the company of longtime pianist/musical director Laurence Hobgood, saxophonist Bob Mintzer, guitarist John McLean (providing lessons in subtleties), bassist John Patitucci, drummers Terreon Gulley & Kobie Watkins, and Lenny Castro on unobstrusive percussion (in four tracks only).

The material ranges from jazz classics such as Miles Davis/Bill Evans' "Blue in Green" (the album highlight, with lyrics by Al Jarreau) to Herbie Hancock's groovy "Come Running to Me," including highly individualized readings of "After The Love Has Gone" (the David Foster-Jay Graydon-Bill Champlin mega hit for Earth, Wind & Fire), King Crimson's "Matte Kudasai" (the opening track), Joe Jackson's delightful "Steppin' Out," and Stevie Wonder's "Golden Lady," to the original "Samurai Cowboy," co-written with Marc Johnson.

Elling, who has finally completed the transition from a vocalist heavily influenced by Mark Murphy to become his own man, also added lyrics to "Nightown, Lady Bright," one of the many great tunes composed by the late (and extremely underrated) pianist Don Grolnick. The 9-minute closing tracks includes Elling, backed by special effects, reading an excepert from Duke Ellington's bio "Music Is My Mistress." The only less interesting track is an uninspired rendition of the Beatles' "Norwegian Wood," but saved by an excellent rock-ish guitar solo. Anyway, this CD already has my vote for Best Vocal Jazz Album of the Year.

The album, beautifully engineered, was recorded by Chris Allen @ Sear Sound, New York, NY, on March 15, 16 & 17, 2010, with additional recording & mixing by Seth Presant @ Village Studios, Los Angeles, CA.
*********
Press Release
The New York Times is one of numerous publications to declare that Kurt Elling is the "standout male vocalist of our time," and "The Gate," Elling's follow-up to his Grammy-winning "Dedicated to You," is among his strongest albums--and perhaps the finest of his career. Produced by Don Was (Rolling Stones, Bonnie Raitt, Bob Dylan), "The Gate" is a musical collection in which boundaries cease to exist, a sensibility enhanced by producer Don Was, who had expressed the desire to work with Elling--an opportunity which Elling found irresistible.

"The Gate" points Elling into a new and satisfyingly emotional direction. He has somehow found a way to make a deeply personal statement out of the music of King Crimson, Joe Jackson, Stevie Wonder and the Beatles--in addition to providing a new and vibrant understanding of Miles Davis, Bill Evans and Herbie Hancock. That Elling is first and foremost a jazz singer makes the work searching and enthralling. His phrasing is cool and meditative as he ventures into areas usually reserved for instrumentalists. As a lyricist, Elling breathes new life into gems previously known only for their melodies. "His words are informed by a powerful poetic spirit," said poet and Bollingen Prize winner Robert Creeley. "Kurt Elling takes us into a world of sacred particulars."

"The Gate" features longtime associate, Laurence Hobgood on piano, Bob Mintzer on sax, John McLean on guitar, John Patitucci on bass and two drummers, Terreon Gulley and Kobie Watkins--in addition to percussionist Lenny Castro. Said Elling, "The musicians on this recording inspired me to be...better." Said The Washington Post, "Since the mid-1990s, no singer in jazz has been as daring, dynamic or interesting as Kurt Elling. With his soaring vocal flights, his edgy lyrics and sense of being on a musical mission, he has come to embody the creative spirit in jazz." That spirit is in rich evidence on "The Gate"--and a musical feast awaits those who pass through.

Kurt Elling is among the world’s foremost jazz vocalists. He has been named “Male Singer of the Year” by the Jazz Journalists Association on half a dozen occasions in the past ten years, and during the same interval has been the perennial winner of the DownBeat Critics and Readers Polls. He is also a Grammy winner, and every record he has made has been Grammy nominated.

Elling’s rich baritone spans four octaves and features both astonishing technical mastery and emotional depth. His command of rhythm, texture, phrasing, and dynamics is more like a virtuoso jazz instrumentalist than a vocalist. His repertoire includes original compositions and modern interpretations of standards, all of which are springboards for inspired improvisation, scatting, spoken word, and poetry.

Declared The New York Times, “Elling is the standout male vocalist of our time.” Said The Washington Post, “Since the mid-1990s, no singer in jazz has been as daring, dynamic or interesting as Kurt Elling. With his soaring vocal flights, his edgy lyrics and sense of being on a musical mission, he has come to embody the creative spirit in jazz.” He has been featured in profiles for CBS Sunday Morning, CNN, on Ramsey Lewis’s Legends of Jazz, and in hundreds of publications.

Elling has recorded and/or performed with an array of artists, including Terence Blanchard, Dave Brubeck, Jon Hendricks, Charlie Hunter, Al Jarreau, Christian McBride, and Kurt Rosenwinkel. He served as the Artist-in-Residence for the Singapore Music and Monterey Jazz Festivals. He has also written multi-disciplinary works for The Steppenwolf Theatre and the City of Chicago. The Obama Administration’s first state dinner featured Elling in a command performance.

Elling is a renowned artist of vocalese—the writing and performing of words over recorded improvised jazz solos. The natural heir to jazz pioneers Eddie Jefferson, King Pleasure, and Jon Hendricks, Elling has set his own lyrics to the improvised solos of Wayne Shorter, Keith Jarrett, and Pat Metheny. He often incorporates images and references from writers such as Rilke, Rumi, Neruda, and Proust into his work. The late poet and Bollingen Prize winner Robert Creeley wrote, “Kurt Elling takes us into a world of sacred particulars. His words are informed by a powerful poetic spirit.”

In 2010 Elling completed an extensive tour with the Monterey Jazz Festival All-Stars and staged Passion World, a commissioned event for Jazz at Lincoln Center with French accordion virtuoso Richard Galliano, singing songs of love and loss in five languages.
Posted by Arnaldo DeSouteiro at 10:06 AM