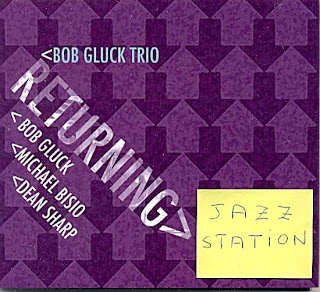 All compositions by Bob Gluck, except "Something Quiet" by Gluck, Michael Bisio & Dean Sharp
Recorded (May 17, 2010), Mixed and Mastered by Will Schillinger @ Pilot Recording Studios, Monterey, MA
Assistant Engineer: Stephen "Stitch" Keech
Produced by: Bob Gluck and Will Schillinger
Produced for FMR by Trevor Taylor

True to its title, "Returning" reprises the energetic trio led by avant-garde jazz pianist-composer Bob Gluck on his first critically acclaimed jazz recording Sideways. The 2008 date, "a potent first document of this expansive trio," (Cadence) has been described as "a near classic work of art." (JazzTimes Community) "Returning" is also an apt successor to Bob Gluck's recent "Something Quiet," and further highlights Gluck’s breadth and depth as both pianist and composer and leader of exciting jazz ensembles.

Bustling with life, "Returning" reunites Gluck with bassist Michael Bisio and drummer-percussionist Dean Sharp, three "seasoned improvising musicians who have found and honed their own communication skills and brought them to a greater whole." (Chronogram) The new recording showcases Gluck's original compositions, which articulate a broad expanse of mood, pulse, and color. The music is textural, sonically lush and multilayered, highlighting Gluck's evocative, angular, yet lyrical approach to the piano. Returning is a work of joyful intensity. It reflects a maturing of the band since its initial foray. As Gluck recounts: “It was my goal to find a balance between my equal affection for straight ahead and more exploratory jazz traditions. Why choose one or the other when they can coexist quite happily?”

Gluck’s life story is as interesting as his music. Raised in New York City, the political activist/Julliard trained pianist eventually developed an interest in the revolutionary acoustic jazz of Ornette Coleman and Keith Jarrett’s American quartet (featuring Coleman alumni Dewey Redman and Charlie Haden, as well as innovative drummer Paul Motian) that was much affected by the altoist’s groundbreaking improvising conceptions. The influence of Jimi Hendrix, seventies era electric Miles Davis groups, Herbie Hancock’s Mwandishi band and Weather Report had already spawned an enduring interest in electronic music that has persisted to this day.

Following a long absence from the music scene, during which time Gluck was engaged in a religious life as a rabbi, Gluck began uniting his philosophical, spiritual and aesthetic pursuits in the world of academia and electronic music. Then in 2005 he returned to the piano as his primary means of musical expression, employing electronics in conjunction with the acoustic instrument. While some may place Gluck within the context of the avant garde, following in the tradition of Cecil Taylor, Sun Ra, Andrew Hill, Paul Bley and Don Pullen, his music reveals an abiding affection towards the more pastoral and pensive aspects of impressionism and late romanticism. His approach as a pianist, composer and improviser is one that intuitively merges intuition with a broad sonic palate where lyricism and abstraction find a shared home.

"Returning" opens with Gluck’s lilting composition “Lifeline.” Here, the tune receives a very different treatment from its previous appearance on "Something Quiet." Gluck’s pensive piano solo expands into a tumultuous display of virtuosity, answered by Bisio’s meditative bass explorations, which call forth a sparkling array of colors from the entire ensemble.

“Time” provides a brief, wild and explosive interlude before the deceptively simple “That’s All You Got.” After the statement of the melody to “That’s All’s”, a rhythmic bridge leads into a series of solos flying high above a rising bass motif that calls to mind Joe Zawinul’s “Birdland.” After teasing the listener with blues inflection, Gluck’s solo builds an increasingly abstract intensity. Bisio’s inventive discourse upon the motif leads then segues to an example of the band’s signature interplay, capped by an expansive drum solo.

The opening plaintive melody of “By a Field” leads to a declamatory musical figure. Gluck follows with dramatic open fifths upon which he crafts a fiery, extended solo. “There’s No There There” provides some musical levity, befitting the song’s title. All three solos locate the middle path sought by Gluck to connect a multiplicity of sensibilities into a single, unified conception.

“Vertigal” is a sectional work. Like “October Song” on Gluck’s "Something Quiet," this composition invokes the formal structures of Herbie Hancock’s “Sleeping Giant” suite from the Mwandishi album "Crossings." Hancock’s band is the subject of Gluck’s forthcoming book “You’ll Know When You Get There: Herbie Hancock and the Mwandishi Band” (University of Chicago Press). The trio crafts an intricately interwoven fabric of musical collaboration, tracing “Vertigal”’s many moods and levels of intensity.

Why does the spontaneous improvisation ”Something Quiet” close this recording rather than Gluck’s previous recording by the same name? Gluck explains that the choice was quite serendipitous. “After we finished recording the planned tunes, studio engineer Will Schillinger asked whether I had what I wanted. After returning from a brief walk in the woods surrounding the studio, I suggested that we improvise something “quiet.” The fragile improvisation that resulted represents my mood on that particular day, as well as the broad expressive range of this unusual trio. The overall tenor of the previous recording, however, struck me as indeed “something quiet.”