Ellen Johnson premieres "Mingus & Beyond" with The Wahya Consort in Ojai, June 12 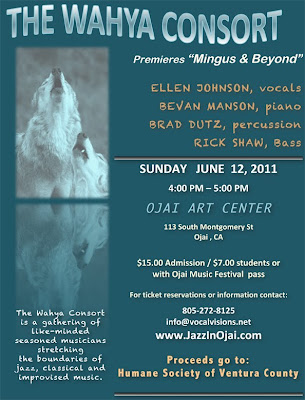 An exciting day of jazz events includes The Wahya Consort making their debut with a premiere of, "Mingus and Beyond," on Sunday June 12, 2011 from 4:00 p.m. to 5:00 p.m. at the Ojai Arts Center located at 113 South Montgomery Street in Ojai. The Wahya Consort includes vocalist Ellen Johnson, pianist Bevan Manson, percussionist Brad Dutz and bassist Rick Shaw performing music of Charles Mingus, original compositions and lyrics, and free improvised music.

The Consort, in support of the Ojai Music Festival occurring the same day featuring composer and conductor Maria Schneider's 18-piece big band and soprano, Dawn Upshaw, is providing a discount for their concert to anyone attending the festival. The name "Wahya," Cherokee for wolf, was specifically chosen by the group to represent the extraordinary beauty and expressions of nature through their musical compositions that focus on original, creative and improvised music with elements of jazz, classical, and world music.

The Wahya Consort is a group of seasoned musicians stretching the boundaries of jazz, classical and improvised music. The name "Wahya," Cherokee for wolf, was specifically chosen by the group to represent the extraordinary beauty and expressions of nature that inspires the music they create. Together they contribute their talents through the instrumentation of vocals, percussion, piano, bass and occasional special guest artists. Whether they are collaborating on inventive improvisations, renditions of jazz classics or creating original compositions and lyrics, the Wahya Consort brings a conscious dimension to group performance. The members of the group include: Brad Dutz, Ellen Johnson, Bevan Manson, and Rick Shaw. 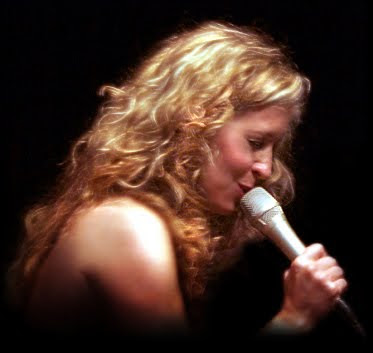 Described by Jazz Journal InternationalMagazine as "superior jazz singing by an artist of the highest quality," Ellen has three critically acclaimed jazz CD's that include These Days, Chinchilla Serenade and Too Good To Title. These Days, called "one of the best albums to be heard from a no-nonsense jazz singer" (DownBeat) and a "sophisticated and successful album that raises the standard of modern jazz singing by at least one notch" (All About Jazz), features a duet with legendary vocalist Sheila Jordan. Johnson is currently working on a new project targeted to be released in 2012, Form and Formless, that will feature guitarists Larry Koonse and John Stowell doing original creative improvisational compositions with classic standards. Ellen has performed, recorded and studied with many exceptional musicians including; Charles McPherson, Louie Bellson, Bobby McFerrin, John Clayton, Willie Pickens, Don Braden, Roy McCurdy, Billy Drummond, Cameron Brown, Gene Aitken, Hugh Martin, Marni Nixon, and George Shirley.

One of the most adventurous singers in the contemporary jazz scene, Johnson was recognized in 2006 as one of the top three jazz vocalists of the yar, along with Dianne Reeves and Diana Krall, by jazz journalist and producer Arnaldo DeSouteiro in his annual Jazz Station Poll. She has been a featured soloist for performances of Duke Ellington's Sacred Concerts filling the shoes of soloist Alice Babs so well that even Ellington author Stanley Dance commented how good her renditions were in comparison. Ellen's versatility for many genres of music contributed to her winning a finalist slot in the American Traditions Vocal Competition where she performed jazz, musical theater and classical renditions of songs for a prestigious panel of judges that included Della Reese, Charles Strouse, and William Warfield.

Ellen is also a songwriter, lyricist, publisher, educator, writer and is the founder of Vocal Visions Records which promotes and produces artists and instructional products, including her own publications, The Warm Up CD, Vocal Builders and You Sing Jazz. Ellen has published lyrics to the famous Sonny Rollins composition, "St. Thomas" and Charles Mingus's "Peggy's Blue Skylight," "Nostalgia In Times Square" and "Noddin Ya Head Blues."

She is currently writing the biography, Jazz Child: The Story of Sheila Jordan, set for publication in the near future. Ms. Johnson, who has a Masters degree from San Diego State University in Vocal Performance, has been on the voice faculties of the University of San Diego, the Old Globe Theatre's MFA program. California Polytechnic University Pomona and has given master classes in vocal jazz at the University of Southern California among many other colleges. She was a keynote speaker on the "Art Song of Duke Ellington" for the National Association of Teachers of Singing (NATS) international conference and served as president and co-founder of the Jazz Vocal Coalition (JZVOC).

Ellen was the Jazz Editor for Singer&Musician Magazine, past president of the San Diego Chapter of NATS, and was the California vocal jazz representative for the International Association of Jazz Educators (IAJE). She has been a panelist for several music industry and vocal conferences that included a variety of industry professionals and artists such as: Alan Paul, Jay Clayton, Jon Hendricks, Mark Murphy, Kurt Elling, Jay Clayton, Kitty Margolis, Dr. Hans Von Leden, and others. Ellen currently resides in the beautiful Ojai Valley of California where she maintains an active professional singing career, conducts clinics and workshops, produces video and music projects through Sound Visions Media, and is a Creativity Coach.

"Percussion wiz" Brad Dutz's unique sound is a result of his expertise with unusual percussion instruments and his ability to creatively combine them together. In addition to playing mallets, Brad specializes in hand percussion and a variety of percussion instruments including; congas, berimbau, bata,bodhran, bones, pandiero, djembe, tabla,kanjira, doumbec, riq, and others. He started his musical journey at age seven in Decatur, Illinois and graduated from North Texas University in 1981. He moved to Los Angeles to study with Luis Conte who still remains a strong influence as both a teacher and friend. Beside his eleven solo CDs, Dutz has co-produced twelve others and played as a sideman for over two hundred recordings. His album credits include: David Benoit, Rick Braun, Jeff Berlin, Jeff Bridges, Rickie Lee Jones, Leo Kottke, Alanis Morrissette, Willie Nelson, Uncle Festive, Steve Smith, Terence Trent D'Arby, KISS, Tribal Tech, and various At the Movies CDs as well as live performances with Airto, Maynard Ferguson, Kenny Loggins, Frank Sinatra Jr., and countless others.

Los Angeles composer and jazz pianist Bevan Manson lives in many worlds, balancing them without seemingly "crossing-over." He is a jazz pianist, an active classical composer, an arranger and producer for many vocalists, a composer of over 100 jazz tunes and the scores for several independent films. His work in the L.A. studios includes frequent on-camera appearances as a pianist in TV and film. His compositions have been remarked on for their engaging tonal melodies and rhythmic complexity. In an interview for "The Inner Voice," the newsletter of the Southern California Viola Society, Polish/American violist Piotr Jandula was asked about solo pieces for viola that he favored. He mentioned only one: "I'm looking forward to learning Bevan Manson's Concerto for Viola. I think it's a fantastic piece ... This piece holds a beautiful promise to all violists." Joanna Mendoza of the Arianna String Quartet performed an early viola-piano version.

In March of 2011 his "California Concertino for Flute and Chamber Orchestra" premiered at the New York Flute Fair by virtuoso flutist Katherine Fink of the Brooklyn Philharmonic and Borealis Wind Quintet, and chamber ensemble conducted by Paul Dunkel. Bevan's "Quartet for Violin, Viola, Cello, and Piano" was first performed by the resident ensemble Arco Voce at the Phillips Collection in Washington D.C. The Washington Post called the work "powerfully polyrhythmic". The American Music Center awarded Bevan a CAP grant for this composition in 2008. Other upcoming performances include "The Race for the Apple Pie", for violin and viola, and "Piano Quartet", both at the Kairos series. Other performances of his music include; "Irony Untold" performed by members of the San Francisco Symphony at the Stern Grove Festival, and "Hotel Viola," which had its first performance at the 2008 International Viola Congress by the Southern California Viola Choir, and was later featured in New York City by the Varsity Violas. He was commissioned to write music for Sierra Chamber Music, L.A. Chamber Orchestra associate principal violist Victoria Miskolczy and for the Southern California Viola Choir. Bevan has worked with Darol Anger, Ron Jones' L.A. Big Band, the Turtle Island String Quartet, Gunther Schuller, Dave Liebman, George Garzone, Jerry Bergonzi, Paul McCandless, Cecil McBee, and Bob Sheppard.

He has recorded for the Iris, Flying Fish, and Challenge labels, and has been featured at the Montreux, North Sea, San Francisco, Boston, and Tirano jazz festivals. Formerly Director of UC Jazz at Cal Berkeley, Bevan served on the faculty of the New England Conservatory for ten years, taught at Berklee College and the Thelonious Monk Institute, and is a graduate of the Eastman School of Music. Bevan is currently a guest composer with the Malibu Friends of Music Kairos series and aside from composing; he remains an active jazz pianist.

Rick Shaw is one of L.A.'s most versatile and in-demand bassists, both upright and electric. He spent three seasons with the Sacramento Symphony before attending Eastman School of Music where he performed in their Philharmonia Orchestra and completed the Jazz Studies program with a Masters of Music degree in 1981.In 1983 Rick moved to Los Angeles and began working as a freelance musician. Since then he has toured with the 60's vocal group The Lettermen, and jazz artists Buddy Rich and Maynard Ferguson, recording with Maynard on his first High Voltage CD. Rick has been the bass player for Johnny Mathis for over twenty years touring all over the country.

He currently plays with Gordon Goodwin's Big Phat Band, touring with them to Japan and Latin America. Active as a studio musician, Shaw has recorded commercials and TV shows such as JAG, King of the Hill, and The Simpsons. His recording credits for vocalists include Julio Iglesias, Willie Nelson, Aaron Neville, Celine Dion, Beck, and Ray Charles. He's also performed in orchestras for movies such as Freaky Friday, National Treasure, and Legally Blonde II.In addition to being a regular with the Big Phat Band, Rick also plays with Bill Holman and Chick Corea. As an educator he teaches bass students and small ensembles out of his own studio and for colleges.
Posted by Arnaldo DeSouteiro at 6:37 AM