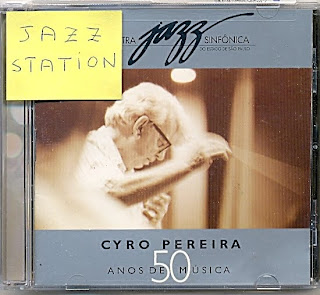 This CD -- Cyro Pereira's lone album as a "leader" -- is a masterpiece. Period.

Curiously, the brilliant but low-profile composer-arranger-conductor (who just passed away, please see the post below) only accepted to record it after his many friends, disciples and students insisted that he needed to celebrate his 50th anniversary in the music biz. The result is astounding! 68 minutes and 22 seconds of pure magic and lessons in orchestration. If you dig Don Sebesky's "Giant Box" or Michel Legrand's "Twenty Songs of the Century," don't miss it.

My personal favorite tracks are two wondrous short pieces: "Cuidado Com O Degrau" (which features the virtuoso Roberto Alves Araujo in the BEST English horn performance ever recorded in "popular" music, propelled by drummer Toniquinho's brushwork) and "Solito" (with Sergio Burgani on clarinet and Marcelo Ghelfi on piano). Composed in 1995, "Cuidado Com o Degrau" sounds better, more fascinating and more modern than the complete works of ANY "contemporary" or "young" Brazilian composer -- specially composer-dentists that gained a cult status in the surreal country I was born.

The sonic quality is equally impressive, with all the great performances of the Orquestra Jazz Sinfônica beautifully captured by engineers Alberto Ranelucci, Deco Quintino & Carlos Rocha in February 1997 in São Paulo, taking advantage of the excellent acoustic ambiance of the Sergio Cardoso Theater. Then the tapes were sent to Oslo, in Norway, where the celebrated ECM engineer Jan Erik Kongshaug did both the mixing and the mastering. Brilliant & essential.
Posted by Arnaldo DeSouteiro at 3:47 PM