CD Reissue of the Week - "Friedrich Gulda: As You Like It" 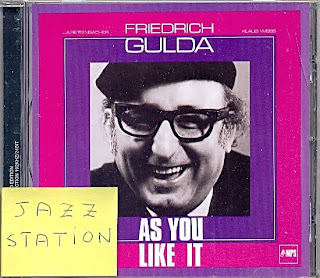 A rare mainstream trio session by the iconoclastic genius Friedrich Gulda (heard on acoustic piano only), with J.A. Rettenbacher (acoustic & electric bass) and Klaus Weiss (drums).
Highlights: a very slow ballad version a la Shirley Horn of "I Only Have Eyes For You" and a medium-tempo rendition of "East of the Sun."
The album also includes a creative reading of Monk's "'Round Midnight," a funkyfied take on Miles' "All Blues," Porter's standard "What Is This Thing Called Love," The Doors' hit "Light My Fire" (recently covered by Eliane Elias on her brand-new album) and Gulda's own "Blues for H.G."
Posted by Arnaldo DeSouteiro at 8:28 AM