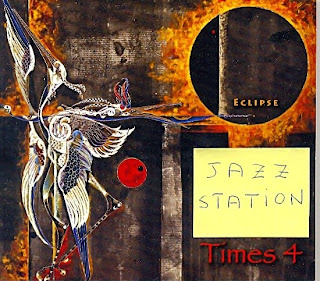 Times 4's self-produced "Eclipse" is simply one of the most delightful and pleasant albums I've heard this year. Formed by Greg Sankovich (keyboards), Kevin Lofton (bass), Maurice Miles (drums) & Lincoln Adler (tenor and soprano saxophones), the Bay Area quartet has developed an amazing & solid interaction. But you can't judge an album like this in terms of "historic importance." The music on "Eclipse," although tightly structured and performed in a high level of musicianship, is not recommended for jazz snobs neither purists. But if you loved Grover Washington, Jr., you'll love Lincoln Adler's approach on the tenor sax and his crystal-clear tone on the soprano sax. If you love Bob James, you'll love Greg Sankovich's keyboard work.

Btw, comparisons with Fourplay wouldn't be unfair. In other words, it's a "smooth fusion" that never becomes boring or fortuitous. The original radio-friendly tunes wisely combine pretty melodies with strong solo statements, specially "Crosswings" and the title track. It's also great to listen to Kevin Lofton's groovy slaps that bring together the best of Will Lee and the late Gary King. Just like Maurice Miles' drumwork sounds like a blending of Harvey Mason and Ndugu. I sincerely hope they don't mind if I point out such references, 'cause it's the best way to give the reader an idea of the sound of a not yet so famous band.

Their renditions of two jazz classics are impressive too. Instead of performing the millesimal ballad version of John Coltrane's "Naima," they present it as a funkyfied piece, carried by Lincoln Adler on tenor, not soprano, while Sankovich uses both Hammond and Rhodes. The other non-original, Miles Davis/Ron Carter's "Eighty One" (originally from Miles' "E.S.P." LP and later recycled by Hancock & Co. on many VSOP concerts) appears in a no less unpredictable way, transformed into a contemporary funk-blues with the help of Sankovich's Hammond, bringing the album to a fitting end. "We just did them Times 4's way," says Maurice.

Last but not least, the musicial qualities of "Eclipse" are enhanced by the sonic excellence of having been recorded & mixed by engineer Jesse Nichols at the Fantasy Studios in Berkeley, California. Besides allowing for better sound separation between the instruments, the facility afforded Greg Sankovich (who uses a Nord in the live gigs) the opportunity to utilize several of its vintage, well-maintained keyboard instruments: a real Hammond B-3 organ, a real Fender Rhodes electric piano, and an acoustic grand piano that had once been played by Bill Evans during his Fantasy years. "I kissed it first," Sankovich quips about playing the grand, featured on Adler's "What They Don't Tell You."
*******
Over the last seven years, Times 4 has established itself as one of the most exciting live attractions on the San Francisco Bay Area music scene. Whether playing major venues under their own name or opening for national touring acts on festival stages, Times 4 has made a solid impression.

Their tight grooves and improvisational prowess have also translated well to disc. Times 4's third CD "Eclipse," finds the group really coming into its own. "The communication between the members has become much stronger," says soprano and tenor saxophonist Lincoln Adler. "There is a real unity in the way we support each other in both solos and ensemble playing."

"We believe that this CD really reflects Times 4 coming together as a band," adds bassist Kevin Lofton. "It was truly a collaborative effort."

Literally collaborative, in that most of the disc's selections were co-composed and arranged by the group, which also includes keyboardist Greg Sankovich and drummer Maurice Miles. For the first time on record, the band has added non-originals to their program as well: "Naima" and "Eighty One."

Coming up with a simple tag to categorize Times 4's style isn't easy. "Times 4 has ended up between genres," Adler observes. "Because we just decided to play the music that comes from our hearts, we didn't turn on the style filter when it comes to composing, so there's funk, there's jazz, and there's a lot of improvisation. I've always been a bit frustrated with the urge to classify music by style. My favorite mixes will go from jazz to classical to Afro-Cuban to R&B to pop to African to tango to lots of things in between."

Sankovich calls the band's music "a Bay Area concoction." Miles describes it as "contemporary with an edge," and for Lofton it's "a nice hybrid of cerebral jazz with more of a backbeat."

In its early days, Times 4 was fortunate to land a steady gig at Straits in San Jose that, over a two-year period, enabled them to refine their improvisational approach to jazz, funk, and soul. All Music Guide wrote of their 2004 debut "Seductivity" that it "succeeds as both funky dance music and a fine example of the funkier side of jazz." Material on that CD and its follow-up "Relations" (2007) drew heavily from open-ended jams created on the bandstand.

For "Eclipse," the four musicians took their time coming up with the disc's collective compositions. But the actual recording went quickly; the album was completed in a two-day session at Berkeley's Fantasy Studios.

Times 4 functions as a democracy in which in each member has an equal voice. The group's uncanny musical cohesiveness is an outgrowth of that process. "As musicians," Sankovich says, "we try to listen to the spaces of conversations, more than to the actual words. We try to listen to the groove. When everybody is firing on all cylinders, then we know we've got a decision."

In addition to performing a CD release event at San Francisco's new Coda Jazz Supper Club, Times 4 has also appeared at the Headly Room in San Jose and at the Sunnyvale Jazz & Beyond series.