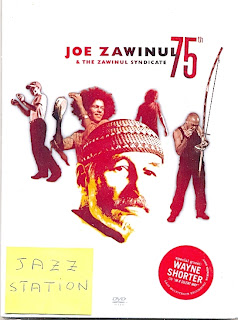 Filmed for a TV broadcast for RTSI on July 7, 2007, the day Joseph Zawinul was celebrating his 75th birthday (he would die two months later, on September 11). This superb open-air concert @ the Lugano Jazz Festival, in Switzerland, features the last incarnation of the Zawinul Syndicate band. Two expatriated Brazilian musicians play their assess off: Santa Catarina-born guitarist Alegre Correa (famous for his work with Raul de Souza and the Vienna Art Orchestra) and the Rio de Janeiro-born percussionist Jorge Bezerra, a charismatic performer heard on pandeiro, congas, timbales etc. All tunes are composed by Zawinul, except "Clariô," an original by Correa, who also sings a la João Bosco.

The other musicians are no less important: bassist Linley Marthe (a mixture of Darryl Jones with Alphonso Johnson), wild drummer Paco Sery (who also does an impressive kalimba solo), and percussionists-vocalists Aziz Sahmaqui (from Morocco, shining specially on the celestial intro of the opening track) & Sabine Kabongo (from Congo).

As a bonus track, the haunting meeting of Zawinul and Wayne Shorter on a keyboards/soprano sax duo on the classic "In A Silent Way," filmed a few weeks later on August 2nd, 2007, @ the Vezprem Festival, in Hungary. Both the audio & video quality of this bonus track are not so good, but the performance is mesmerizing. An essential item for all Zawinul and Weather Report fans.