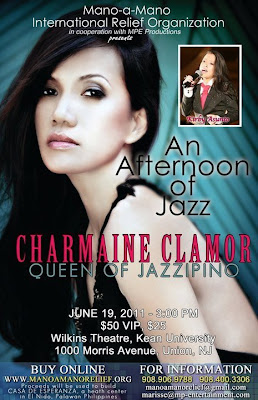 With two consecutive albums in the JazzWeek World Music Top-10, including the rare feat of simultaneously making Top-5 on both the World (#2 ranking) and Traditional Jazz (#4) radio charts, Charmaine Clamor has earned unprecedented praise for introducing American audiences to Filipino languages, melodies, and instruments – and for sharing a once-in-a-generation, astonishingly expressive voice.

Recognized today as “one of the important and original jazz singers of the decade” {Don Heckman, Los Angeles Times}, a “dynamic new compass point in World Music” {Christopher Loudon, Jazz Times} and “one of the finest singers to come around in a long time” {Jerry D’Souza, All About Jazz}, Charmaine began her musical journey at age 3, entertaining passengers -- whether they liked it or not! -- in the back of buses traveling to Manila. Originally from the provincial town of Subic-Zambales, Philippines, young Charmaine provided piano accompaniment while her mother sang kundiman (Filipino torch songs) and English-language classics. These childhood memories inspired Charmaine’s enduring love of American music.

After immigrating to the United States as a teenager, Charmaine graduated as valedictorian of her high school class and went on to earn a Masters Degree in Physical Therapy from Cal State-Northridge. Throughout her college years, Charmaine worked as a “KJ” (a karaoke hostess). She was discovered by the musical director of Crescendo, a vocal jazz harmony quintet, while singing Whitney Houston songs at a Filipino fried chicken restaurant.

In 2005, following nearly a decade of ensemble singing, Charmaine made her solo recording debut with "Searching for the Soul," and her “bedroom eyes voice” instantly garnered comparisons from critics and disc jockeys to legendary vocalists such as Nina Simone, Nancy Wilson, Julie London, Lena Horne, and Cassandra Wilson. Several pundits dubbed her “the Filipino Sarah Vaughan.”

Charmaine's critically acclaimed second album, "Flippin’ Out" (2007), brought her international recognition. On this landmark recording, she blended the soul and swing of American jazz with traditional Filipino folk music, languages and instruments, creating a new hybrid genre called jazzipino. Charmaine’s artistry was featured on BBC’s “The World” and NPR’s “Weekend Edition,” which described her music as “the perfect bridge of two cultures.”

Her third album, "My Harana: A Filipino Serenade" (2008), revived the ancient Filipino courtship tradition of harana – serenading a lover beneath her window – but with a twist: this time it was the woman doing the serenading! Charmaine’s bold vision and sublime vocal tenderness landed her on numerous magazine covers and TV newsmagazine shows in her native Philippines, and solidified her role as her birth country’s most celebrated international musical ambassador.

Indeed, because of her presence on American radio and concert appearances around the nation, Charmaine has been credited with introducing authentic Filipino musical culture to mainstream listeners. To further her lifelong goal of bringing the music of the Philippines to ever larger audiences, Charmaine served as one of the founding members of JazzPhil-USA, a non-profit organization that promotes jazz artists of Filipino descent in the United States. For five consecutive years, she has lent her notoriety to the popular Filipino-American Jazz Festival, held annually in Hollywood, at the Catalina Bar & Grill Jazz Club, where Charmaine’s appearances with fellow Fil-Am jazz luminaries inspire standing-room-only crowds.

In 2009, Charmaine was signed to a multi-record deal with Viva Records, one of the largest pop music labels in Asia. As Viva’s first and only jazz artist, her debut album, appropriately entitled "Jazzipino," brought Charmaine’s unique sound to millions of new listeners on Filipino radio and television.

In 2010, Charmaine appears on David Byrne and Fatboy Slim's "Here Lies Love" (Nonesuch), with a cast of celebrated female vocalists, including Cyndi Lauper, Tori Amos, and Natalie Merchant. Charmaine was the only jazz singer selected for the project.

Charmaine resides in Los Angeles, California, where she tends to an organic vegetable garden and volunteers for environmental organizations that promote green living.

Got your FREE track? http://www.charmaineclamor.com/promo.php
Posted by Arnaldo DeSouteiro at 9:19 AM