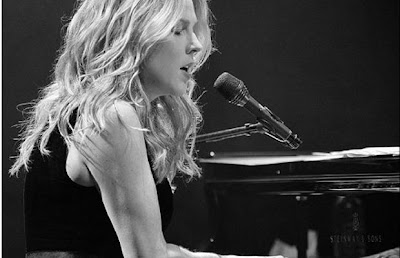 Diana Krall invited her audience into the living room of her childhood home in Nanaimo, B.C. and, alone at the grand piano with only her dad's gramophone as a prop for company, played the music she loved as a girl.

It was an intimate show Sunday night at Theatre Maisonneuve, as Krall put a sold-out hall at ease with standards and surprised with some not-so-standards of the Great American Songbook.

Opening with Peel Me a Grape, she soon launched into a medley of Fats Waller tunes, stamping her black stiletto heels as she pounded away at the keyboard, boogie-woogie style, tossing her blond curls to the rhythm.

Form-fitting, sleeveless black dress aside, it was a far cry from that old Chrysler ad and The Look of Love, more a return to the roots of Krall's 1995 fest debut when she proved her love for Nat King Cole.

In between songs, she talked fondly of learning her chops from Jimmy Rowles and jamming in Oscar Peterson's basement, recalled how she was a disaster on third clarinet in her high-school band, and reminisced about listening to jazz on her father's reel-to-reel tape player and 78-rpm records.

If the audience didn't always get her jazz references, Krall forgave them. "Thanks for listening to songs you might not have heard before," she said after introducing something by Bix Beiderbecke and getting no response.

No matter. Whether it was a familiar tune like Don't Fence Me In or an unfamiliar one like the vintage ode to dope, Reefer Song, Krall's performance -- her first full-length solo concert ever -- pulled the crowd into her world.

She closed her 15-song, 80-minute uninterrupted set with a lovely but obscure 1938 movie tune called As Long As I Love and came back for a three-song encore playing -- guess what? -- a ukulele. Why? Because her childhood hero, Groucho Marx, played one.

She and her husband, Elvis Costello play the instrument in bed, she explained, before softly strumming All I Do Is Dream of You and encouraging her fans to sing along. Few knew the words.

Then it was back to the piano for Krall's own Departure Bay and, as an adieu, a Prairie Lullaby for her twin boys, Dexter and Frank. Sweet dreams, all.
Posted by Arnaldo DeSouteiro at 11:44 AM